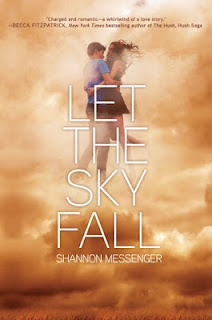 In a world full of gales, tempests, and squalls


The sylphs live in secret, within closed walls


But there’s one with the power to change their fate


Can he take back his life before it’s too late?

Audra’s the guardian who will stand and fight


But will she fall prey to Raiden’s dark might?


Caught in a net of betrayal and lies


How will she fight the storm in the skies?

It’s all up to Vane and the powers he claims


Will he save his world or will it end up in flames?


The winds whisper secrets of a past he once lost


But he will fight for his love, no matter the cost.

“But I feel a change in the winds.  They whip with more urgency, their songs clipped and rushed.

Blasted with passion and treachery, Shannon Messenger creates a world that will lift you off your feet.  Overblown with suspense, inundated with desire, and riddled with mystery, Let The Sky Fall is tempest of emotion.  So close your eyes and throw caution to the wind as it sweeps you away to a place where the air really does whisper in your ear.


Let the Sky Fall was my most anticipated read of 2013, and it did not disappoint.  This book starts out with a boom, and from there, it’s a steady mix of suspense, action and romance.  Shannon blended her world seamlessly with ours, and I can’t wait to see what’s in store for us in the next few books.


The writing was peaceful at just the right times and rocky and jagged when the situation called for it.  I found myself taking note of quotation after quotation for my Teaser Tuesday because Shannon is one of those authors whose words capture your attention and make you say, “Wow.”  Her words are rife with ambiguity, but even so, she never gives anything away.  I couldn’t turn the pages fast enough!


You know I love a book when I gush about the heroine.  Like I’ve said before, it’s easy to write a swoony guy, but a tough yet vulnerable girl who doesn’t annoy or frustrate a reader?  That is a rare feat, but Shannon met that storm head on, and the result was the powerful Audra.  Bound by oath, broken by her past, and beaten by her circumstances, Audra is a sylph on a mission; and she will complete her mission no matter the consequences.  I admired her courage and her determination—she wouldn’t give up, and she wouldn’t let her heart get in the way.  Though I found myself cheering for her to throw caution to the wind, I still admired her bravery to stand in the face of temptation and danger.


Vane was charming and funny, and his personality had me swooning.  Not to mention he’s got abs of steel!  He’s different than other guys in YA.  He’s deeply caring and at times a bit wimpy, but when the moments count, he stands up with his armor of bravery.  Usually a guy that’s doesn’t have a bad boy bone in his body would annoy me, but Shannon pulls it off with Vane.  I think it’s his charm that does it—when he makes a move, it’s deliberate and charismatic, and I couldn’t help but smile!


And then there’s Audra’s mother.  GRRRR!  She made me so angry with her nonchalant and apathetic attitude toward Audra.  She’s this super powerful sylph, but she has withered away because of the losses in her past.  There were times when I just wanted to smack her and scream, “She’s your daughter!  Care!”  I had an extreme emotional reaction to her, so Shannon definitely did her job.


OMG…I didn’t see it coming!  I was so swept up in the romance and suspense that the ending caught me completely off guard.  It was  brilliant and compelling ending, and I really liked that Shannon didn’t end it with one of those break-your-heart cliffhangers.  It was poignant and answered many questions, but there are still many more things that are left to be revealed in the future books.  I was a huge fan of the ending, and it just made me wish the next book would come out sooner.


Let the Sky Fall is perfect for teenagers and adults alike, and I highly recommend it to fans of YA literature.  So if you’re tired of the same old same old in YA and you need a change in the winds (hehe), then check this one out!  Enthralling and chaotic—Shannon’s world is charged with love, pierced with anger, and overflowing with deceit.


“Her face looks pale as she stares into space, ignoring me.  She tosses the dove into the sky, its wings flapping in my face as it flies away..