Waiting on Wednesday is a weekly meme hosted by Jill over at Breaking the Spine. It spotlights books that have not yet been released, but ones that you should pre-order today! This week's book that we are anxiously awaiting is DECEPTION by CJ Redwine.  DECEPTION releases on August 27, 2013 from Harper Teen. 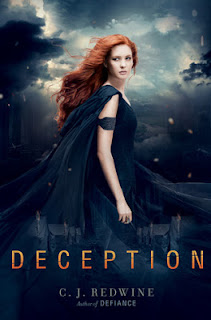 Baalboden has been ravaged. The brutal Commander's whereabouts are unknown. And Rachel, grief stricken over her father's death, needs Logan more than ever. With their ragged group of survivors struggling to forge a future, it's up to Logan to become the leader they need—with Rachel by his side. Under constant threat from rival Carrington's army, who is after the device that controls the Cursed One, the group decides to abandon the ruins of their home and take their chances in the Wasteland.

But soon their problems intensify tenfold: someone—possibly inside their ranks—is sabotaging the survivors, picking them off one by one. The chaos and uncertainty of each day puts unbearable strain on Rachel and Logan, and it isn't long before they feel their love splintering. Even worse, as it becomes clear that the Commander will stop at nothing to destroy them, the band of survivors begins to question whether the price of freedom may be too great—and whether, hunted by their enemies and the murderous traitor in their midst, they can make it out of the Wasteland alive.

In this daring sequel to Defiance, with the world they once loved forever destroyed, Rachel and Logan must decide between a life on the run and standing their ground to fight.


I am so excited about this one!  I really loved Defiance--Logan and Rachel had such a sweet romance, and I just know its going to get steamier in this installment!  (At least I hope it will.)  I had such a strong reaction to the Commander in the first book--I wanted him to get ripped apart by the beast.  This cover is gorgeous, and I'm dying to find out what happens next for everyone!

Posted by Jennifer @ YA Sisterhood at 5:01 AM