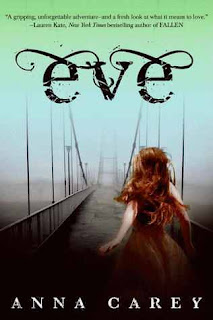 Eve by Anna Carey
Published by HarperTeen
On Shelves Now
Reviewed by:  Middle Sis Jenn
The Sisters Say:  A chilling look at a crumbling world


I will admit, I didn’t even know what this series was about until I received an ARC of the third and final book, Rise.  So, I figured, I have the third book—why not read them all back to back—no waiting, no “oh my gosh, what a cliffhanger” reactions.  I will say, this is the perfect way to read a series!  I loved being able to read them all back to back.  I spent an entire week in Anna’s world, and I will say, I am so glad HarperTeen sent me the third book because, otherwise, I would have totally missed out!


Eve takes place in a ravaged America, after a deadly plague wipes out most of the population.  A King has taken control of the citizens and forced many of the into unspeakable actions in the name of “peace” and “survival” and “hope.”  Many people argue that the problem with Eve is the world-building.  There just isn’t enough, and while I can see their argument, I will say that it didn’t bother me.  I’m much more interested in the action and the characters, so I didn’t need to know more about how the world ended up that way and what not.  I like that the book focused more on the characters themselves—their problems, their losses, and their doubts.


This was definitely a quick read—I read it in one sitting, and went straight on to the next book.  I really like that it was a one sitter, but I wish there would have been more action near the end.  There’s plenty of action throughout the book, but the ending just felt rushed to me.  I wanted to see more passion, more anger, more fear; and I didn’t really get enough of that to really understand the motivations of some of the characters.


Surprisingly, my favorite character was Arden.  She is argumentative and blunt, understanding the harsh realities into which they have been thrust.  She is hardened, and I found myself taking an immediate liking to her, attitude and all.  She wasn’t whiney, and she definitely wasn’t going to bow down to any man—and I really liked that about her.  I felt like she was trustworthy and smart, and I would definitely put my life in her hands if I was Eve.


Eve was up and down for me.  I really liked her character at times because she didn’t just stay in the mold that she was raised in; she dared to question authority and her beliefs, and as a result, she was rewarded with a great relationship.  However, I felt like there were times when she was a bit daft and rash.  She lunged into problems head first without thinking about the consequences, and that is one of my biggest pet peeves in a character.  I know that these rash decisions are what create the action and drama in a book, but I think you can make just as many great scenes without the stupidity.  Especially since Eve was the valedictorian, I would think she would have a bit more common sense, even if she was brainwashed by the teachers into believing false truths.


And of course, I have to mention Caleb—I just love the rough and tough guys.  The only problem I had is that we didn’t see enough or hear enough from him.  I wanted to see more of his talents and more of his background—what made him who he is and why does he care so much about this random girl.  I wanted to see inside his head more, and I didn’t get that.  Maybe a novella will pop out of this world at some point???  I really liked Caleb—he was caring, and strong, and protective.  I just need more of him!


Overall, this was a great read, and I would definitely recommend it to dystopian fans!  I can’t wait to see what’s next for Anna Carey.
Posted by Jennifer @ YA Sisterhood at 12:01 AM