You guys remember a few months ago when we revealed the cover for Cora Carmack's LOSING IT? Remember how it then hit the best seller lists and got picked up by Harper Collins? Well, we're now back with more fun news!

First, the LOSING IT paperback releases SO soon... On February 26th!!!! You can pre-order it now. Let's help the paperback do just as well as the eBook did!

And..... We're happy to reveal the cover for Cora's newest book.... FAKING IT! This is the companion novel to LOSING IT, and follows Cade!

So without further ado... 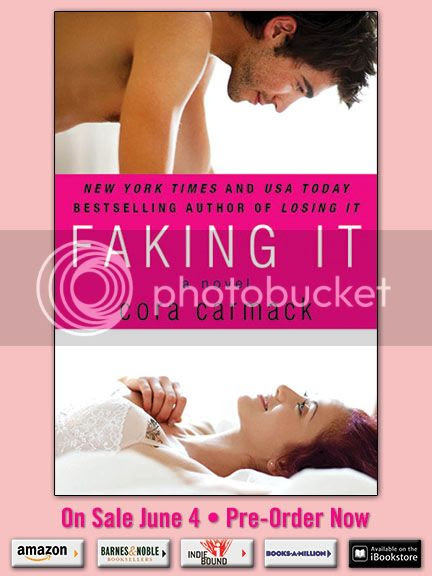 ISN'T IT GORGEOUS??? And WAIT... It gets better! Check out the blurb below!

Mackenzie "Max" Miller has a problem. Her parents have arrived in town for a surprise visit, and if they see her dyed hair, tattoos, and piercings, they just might disown her. Even worse, they're expecting to meet a nice, wholesome boyfriend, not a guy named Mace who has a neck tattoo and plays in a band. All her lies are about to come crashing down around her, but then she meets Cade.

Cade moved to Philadelphia to act and to leave his problems behind in Texas. So far though, he's kept the problems and had very little opportunity to take the stage. When Max approaches him in a coffee shop with a crazy request to pretend to be her boyfriend, he agrees to play the part. But when Cade plays the role a little too well, they're forced to keep the ruse going. And the more they fake the relationship, the more real it begins to feel.

<3 p="">
You don't have to have read LOSING IT to read FAKING IT, but you'll certainly know the characters better if you do.


And there you have it! We hope you're all as excited as we are!!! And if you haven't read LOSING IT.... What are you waiting for?
Posted by YA-Sisterhood at 11:01 PM