Waiting on Wednesday is a weekly meme hosted by Jill over at Breaking the Spine. It spotlights books that have not yet been released, but ones that you should pre-order today! This week's book that we are anxiously awaiting is GATED by Amy Christine Parker.  GATED releases on August 27, 2013 from Random House Childrens. 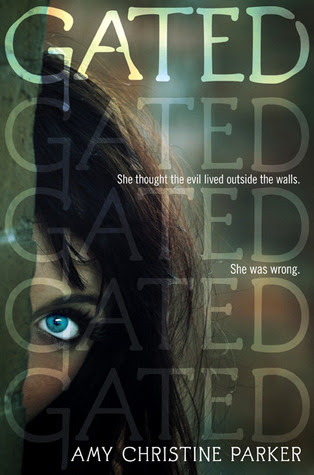 Do the gates keep the unchosen out or the chosen in?

In Mandrodage Meadows, life seems perfect. The members of this isolated suburban community have thrived under Pioneer, the charismatic leader who saved them from their sad, damaged lives. Lyla Hamilton and her parents are original members of the flock. They moved here following the 9/11 terrorist attacks, looking to escape the evil in the world. Now seventeen, Lyla knows certain facts are not to be questioned:

Pioneer is her leader.

Will is her Intended.

The end of the world is near.

Like Noah before him, Pioneer has been told of the imminent destruction of humanity. He says his chosen must arm themselves to fight off the unchosen people, who will surely seek refuge in the compound's underground fortress--the Silo.

Lyla loves her family and friends, but given the choice, she prefers painting to target practice. And lately she'd rather think about a certain boy outside the compound than plan for married life in the Silo with Will. But with the end of days drawing near, she will have to pick up a gun, take a side, and let everyone know where she stands.
~*~*~*~*~*~*~*~*~*~*~*~*~*~*~*~*~*~*~*~*~*~*~*
I love the sound of this one!  Lyla sounds like a great heroine, and I can't wait to see how her struggle begins and ends.  I have a feeling its going to be full of a great action, and a wonderful forbidden love affair!  And isn't the cover creepy???!!!﻿
Posted by Jennifer @ YA Sisterhood at 12:01 AM