Blog Tour: Siege and Storm by Leigh Bardugo and Giveaway!

Today we have the absolute pleasure of hosting the Blog Tour for Siege and Storm by Leigh Bardugo!!!!!  Leigh put together a wonderful guest post (with an AMAZING title, if I say so myself).  Be sure to check out my review and enter the giveaway at the bottom of the post!  So, without further ado...

Tales from the Darkling's Bed Chamber: Fun Facts about the Siege and Storm ARC

The Advanced Reader Copies (also referred to as ARCs or galleys) of a book can go out anywhere from three to six months before a book is published. I've heard of endings changing or big scenes getting cut, but in the case of both Shadow and Bone and Siege and Storm, the changes we made mostly came down to catching typos, repetitions, and a few not so minor mistakes. (I managed to give the wrong name for an entire town that was destroyed.)

Here are a few of the bigger differences you'll find between the ARC and the final version.

1. Obviously, the major change is the cover. I actually love the fact that both of my ARCs have covers radically different from what we ended up with on the final. With Shadow and Bone, the ARC cover was in the running for the final and I still have a soft spot for it, though I prefer the cover we ended up with. (To see some of the other cover directions that were discussed and discarded, click here) The cover of the Siege and Storm ARC was just a placeholder, but the feel of it is still in keeping with the series. 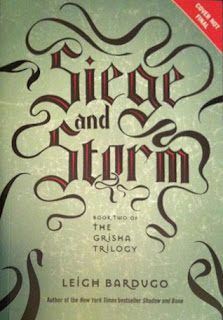 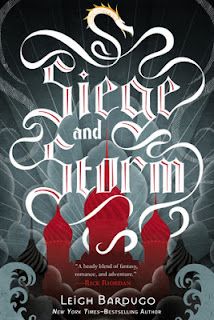 2. The Siege and Storm ARC features the map from book 1, but the hard cover will have an expanded map created by Keith Thompson showing more of Fjerda, Shu Han, and the lands across the True Sea.

3. There are two different chapter headings in the ARC. The chapter headings with the antlers were first created for Shadow and Bone, but they felt a bit too Celtic and medieval for the world of the book. Somehow a few of them found their way into the ARC of Siege and Storm. (My best theory is art department pixies.) They were created by April Ward and I have to say, I'm actually really glad they got to see the light of day. 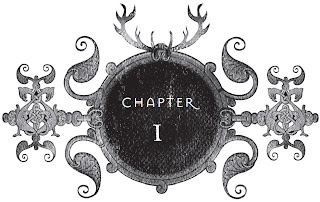 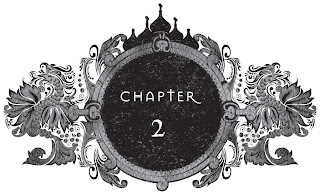 4. My favorite difference between the ARC and the final version of the book is the change we made in the description of the Darkling's bed chamber.

This is how it appears in the ARC:

The chamber was hexagonal, its dark wood walls carved with swirling vines and magical beasts. Above the huge canopied bed, the domed ceiling was wrought in smooth black obsidian and spangled with chips of mother-of-pearl laid out in constellations.

The chamber was hexagonal, its dark wood walls carved into the illusion of a forest crowded with slender trees. Above the huge canopied bed, the domed ceiling was wrought in smooth black obsidian and spangled with chips of mother-of-pearl laid out in constellations.

It's a small difference, but a significant one. Each major section of the Little Palace has a distinctive dome, but beyond that, the original description could refer to just about any other room in the building—and my editor called me out on it. Without realizing it, I'd used a kind of narrative shorthand to describe the chamber. It was a lost opportunity, a moment to offer a bit more insight into a character and to give the reader a deeper experience of the world. I spent quite a bit of time deciding what the Darkling would choose for the walls of his chamber, the first thing he'd see when he woke in the morning and the last he'd look at when he went to bed at night.

Siege and Storm by Leigh Bardugo


The Sisters Say:  Gripping and Powerful, The Perfect Mix of Love and Hate
Darkness never dies.

Hunted across the True Sea, haunted by the lives she took on the Fold, Alina must try to make a life with Mal in an unfamiliar land, all while keeping her identity as the Sun Summoner a secret. But she can’t outrun her past or her destiny for long.

The Darkling has emerged from the Shadow Fold with a terrifying new power and a dangerous plan that will test the very boundaries of the natural world. With the help of a notorious privateer, Alina returns to the country she abandoned, determined to fight the forces gathering against Ravka. But as her power grows, Alina slips deeper into the Darkling’s game of forbidden magic, and farther away from Mal. Somehow, she will have to choose between her country, her power, and the love she always thought would guide her–or risk losing everything to the oncoming storm.


“The Darkling would know where to find me, and when he was strong enough, he’d come looking.  Ready or not, we’d have no choice but to make a stand…I would face him, and one way or another, this would end.” ARC, pg 160


When I read Shadow and Bone last year, I was completely captivated by the dark and unrelenting world that Leigh created.  It was so good that I didn’t think she would ever be able to top such a wonderful debut.  But then Siege and Storm came along, and BAM! I was left breathless, struggling to reign in how much I loved this book!  Beguiling, gut-wrenching, and intoxicating—Leigh’s world calls out the darkness in us all, but even more, it shows us how to take the light and push the darkness back.  My YA world will never be the same.


If you follow my reviews, you know that I like books that blend good and evil so seamlessly that you have a difficult time seeing where one ends and the other begins.  Leigh does this effortlessly with Alina and The Darkling.  My absolute favorite part of this book was seeing Alina struggle with her own darkness.  She is drawn to the power like it’s a missing piece of her own heart, yet she pushes back against the overwhelming desire.  She is so strong, even when it comes to the point where she realizes she might lose everything.  But that is what makes an amazing hero—Harry Potter, Frodo, Tris, Katniss—they know what’s at stake, and still, they make that sacrifice.  Alina is becoming one of those great heroes, and I can’t wait to watch her as she stumbles and fights to the end.


For all you Mal fans out there, you will be pleased to know that he has a huge role in this sequel.  I wasn’t a Mal fan at first because he seemed to quiet, to laid-back.  I didn’t feel the passion in him in the first book (I was a Darkling fan, don’t judge).  But in this book, Mal will take your breath away.  He’s strong where Alina is weak, and his love for her shines brighter than even the darkness slowly coating Ravka.  But, he isn’t perfect.  He’s jealous and broken—feeling caged in a battle that he didn’t choose.  He struggles just as much with Alina does, and it makes the plot so much more realistic and emotional.  My heart broke for Mal as he started to realize the fate that might await he and Alina.  Still, I think we are about to see big things from Mal in the third book.


I love it when authors take time to develop the villain thoroughly.  Many times you just get mentions of them, whispers of their dark deeds, and glimpses of their evil powers.  We get all these with The Darkling, but even more, Leigh shows us his weaknesses.  We see the small parts that remain human—the parts that want to be redeemed, even if fate has handed him a careless heart.  It’s this weakness that makes The Darkling so compelling, and that is why, even though I like Mal, I still feel like Alina and The Darkling are made of the same cloth.  “Like calls to like,” Baghra and The Darkling tell Alina over and over, and I can’t help but agree.  Whatever their souls, their hearts are made of—Alina and The Darkling’s are the same.  That doesn’t mean that I think they are both evil.  On the contrary, I think they are both made of power, but they just both chose different paths.


Leigh’s writing is flawless and beautiful, and her world stands on the edge of a cliff, teetering back and forth, ready to fall into darkness.  Never a dull moment, Alina and Mal’s journey is full of danger, beasts, and romance; and I promise you, from Chapter 1, you won’t want to put this one down.


I could go on and on describing the world and characters in Siege and Storm.  Darkness may never die, but in order for the darkness to exist, there must be light.  I can’t wait to see if Alina’s light is strong enough to stamp out the dark.