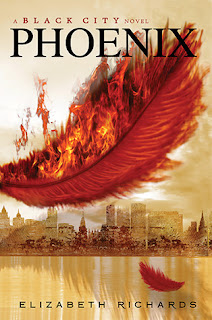 Phoenix by Elizabeth Richards
ARC received from Putnam Juvenile (Penguin)
Release Date:  6-4-2013
Reviewed by:  Middle Sis Jenn
The Sisters Say:  Action-packed, Heart-wrenching, and Perfect with a Capital P!
Weeks after his crucifixion and rebirth as Phoenix, Ash Fisher believes his troubles are far behind him. He and Natalie are engaged and life seems good. But his happiness is short-lived when he receives a threatening visit from Purian Rose, who gives Ash an ultimatum: vote in favor of Rose’s Law permanently relegating Darklings to the wrong side of the wall or Natalie will be killed.

The decision seems obvious to Ash; he must save Natalie. But when Ash learns about The Tenth, a new and deadly concentration camp where the Darklings would be sent, the choice doesn’t seem so simple. Unable to ignore his conscience, Ash votes against Rose’s Law, signing Natalie’s death warrant and putting a troubled nation back into the throes of bloody battle.


I have had a copy of Black City since its release, but since my sister Amy had already reviewed it, I kept putting it off for others I needed to read first.  After receiving an arc of the sequel, I decided to pick it up and see what it was all about.  Reaction?  Why did I wait so long to read this one!!!  If you’re a book blogger or just a bookie, you’ve been struck by this epidemic before—letting a great book get further and further down your TBR pile, and then when you finally read it, it’s like BAM!  Anywho, I,  for one, can say that anything by Elizabeth Richards will make it to the top of my TBR pile, never again becoming a victim of the “Waiting Too Long To Read” disease.


Okay…so let’s get to Phoenix.  I just loved it!!!!  It starts out pretty much right after Black City ended, and the rebellion is staring to get really heated.  The vote for Rose’s Law is about to come, and it has divided the country—but not just in two.  Purian Rose, the Hitler of Elizabeth’s world, is ready to go after everyone he deems impure.  As a result, it become a dog eat dog world where everyone has to look out for themselves.  One of the parts I loved about Phoenix was that Elizabeth brought more species forward, including Lupines and the mysterious Bastets.  There is just so much more to this world that we don’t know, and I found all its inhabitants interesting and dangerous in their own way.


One of the things I am always worried about with sequels is the second book slump.  Most of them follow the same old formula—the love interests get torn apart by something and the world falls into an even deeper disarray.  Now, Phoenix does follow this formula in its own way, but it’s done in a way that will not bore you.   There is so much action in this one that I was constantly sitting on the edge of my seat.  Just when you think that they are out of Purian Rose’s grasp, they make a wrong turn and go crashing back into his net.  It’s spine-chilling and heart-breaking, and the discoveries that Natalie and Ash make along the way will cut you deep.  But, there is very little time to mourn, because just around the corner is something even more atrocious.  Elizabeth will keep you guessing and keep you anticipating the next disastrous event.


My favorite part of this installment was getting to see more of the United Sentry States.  This story takes place all over the country, and seeing the different cities and the Barren Lands was extremely interesting.  Even more so, we see into the past persecution of the Darklings, and it is both eye-opening and disturbing.  I found haunting similarities between this war and our own tragic past during World War II.  These similarities added to the chilling tone of the novel and the gruesome paranoia of the tyrant, Purian Rose.


The only thing that got me frustrated at times was Natalie and Ash’s relationship.  They keep secrets from each other, even though they claim to be so in love.  I understand the reasoning behind keeping such secrets, but I still think they were being selfish and immature by not being honest.  As a result, their actions became very much like a middle school romance.  I found it hard to see the love that had blossomed between them when they both were willing to sacrifice their lives after Gregory’s death in the first book.  However, this didn’t deter me enough to keep from loving the book.


OH…and the ending!  Talk about a cliffhanger I didn’t see coming.  There were some predictable aspects of the books (although I suspect Elizabeth of planting a few red herrings in there to throw us off), but the ending—DIDN’T SEE IT COMING!!!!!


Elizabeth’s world is full of rage, hatred, deceit, and darkness; and born of these horrible acts and feelings is a world that persecutes and murders in the name of peace and faith.  It’s a broken world left to crumble beneath the weight of its sins, unless a handful of outcasts can defy the laws, break down a despot, and spark a flame of resistance.  I can’t wait to find out if Ash and Natalie can truly rise from the ashes to build a better world.
Posted by Jennifer @ YA Sisterhood at 12:01 AM