If I Should Die by Amy Plum 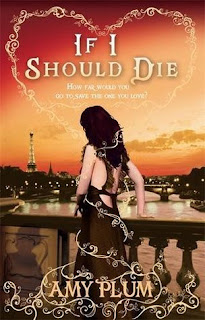 If I Should Die by Amy Plum
ARC received from HarperTeen
Release Date:  5-7-2013
Reviewed by:  Middle Sis Jenn
I will not lose another person I love. I will not let history repeat itself.

Vincent waited lifetimes to find me, but in an instant our future together was shattered. He was betrayed by someone we both called a friend, and I lost him. Now our enemy is determined to rule over France’s immortals, and willing to wage a war to get what they want.

It shouldn’t be possible, none of it should be, but this is my reality. I know Vincent is somewhere out there, I know he’s not completely gone, and I will do anything to save him.

After what we’ve already fought to achieve, a life without Vincent is unimaginable. He once swore to avoid dying—to go against his nature and forsake sacrificing himself for others so that we could be together. How can I not risk everything to bring my love back to me?


Heart-breaking and romantic, Amy Plum’s If I Should Die will take you on a rollercoaster of life and death; but this time, death could truly become permanent.  This is it—the end is here.  A champion will emerge, a war will be fought, a prophecy will be fulfilled.


Final books in a series—I both love and hate them.  Finishing a series is like closing a chapter on your own life.  You have come to know and love characters and settings, and watching them end is an unbearable relief because you want a conclusion to the trauma and conflict, but at the same time, you don’t want to leave those characters behind.  Vincent, Jules, and Kate, along with so many other of Amy’s characters will be truly missed.


After that unbelievably torturous cliffhanger at the end of book 2, I just had to know what was going to happen next; and this third book does not disappoint in its ending.  However, the first 200 pages were a bit of a disappointment to me.  Don’t get me wrong, this was good book, but it was just really slow starting.  I had a hard time pushing through to get to the action and revelations.  But, if you are like me, and you just have to know what happens with Vincent and Kate, then this is well worth the slow parts to find out if there will be a happily ever after.  So, push through those parts because starting with Part 2, the action really picks up.


I really loved Vincent so much in this book, even when he was being overly corny with his gushing feelings.  He is very much the epitome of a hopeless romantic, and I think many girls love him for this.  I love his strength and determination to fight for the bardia and to protect the ones he loves.  He’s self-sacrificing to a fault, but I just can’t help but love him.  Unfortunately, the other guy I love so much, Jules, wasn’t in this one too much.  I really missed his humor and quips, and sadly, I think the book suffered because of his absence.


Kate was such a great heroine!  She’s strong-willed and confident, and she knows what must be done for the greater good.  I admired how she was able to absorb the heart-breaking sadness of revenants dying around her, yet still fight on.  She seems much more mature in this final book.  I also really loved Georgia.  She adds some much needed comic relief, and she is completely fierce despite her weaknesses.  Her fiery temper and hard-to-get acting definitely made me laugh at times.


Besides the slow parts, the other thing that bothered me was the predictability.  I won’t go into detail because it would be a major spoiler, but I pretty much knew how everything was going to turn out before I even started reading this final book.  However, even with the predictability, I found myself still being emotional.  I will admit to a few tears near the end, and I am not usually a crier.  But, Amy didn’t shy away from death, and I admire her for that.  It made the war more realistic, and it added an emotional depth that many books about good vs. evil don’t have.


Overall, I was happy with the way this series ended.  I felt like Amy wrapped everything up well without leaving some lingering questions.   While it is a slow read for most of the book, it was definitely worth it to get to the amazing ending.  I will miss the world of the Revenants, but mostly, I will miss the epic love story of Kate and Vincent.
Posted by Jennifer @ YA Sisterhood at 10:34 PM