The Last Academy by Anne Applegate 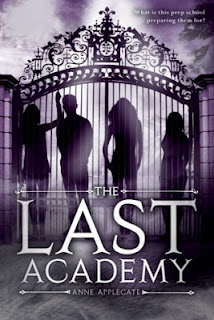 
I was really excited to read The Last Academy because I love boarding school books.  They make the perfect setting for a YA book.  There are no parents around, the boys and girls dormitories are always close so romance is always tempting, and sneaking out and getting in trouble is a must.  I was really looking forward to all of this, adding to it the idea that Camden is seeing things in the dark and having strange memories.  I was very hopeful that this would be a great read; unfortunately, it fell flat for me.


I think my main problem was the age of the main character.  I didn’t realize she was going to be so young (a freshman), and as a result, most of her actions and thoughts were very immature.  I wanted there to be a great romance, but instead, I just got immature girly thoughts and giggles as the cute guy passed by.  I’m not the giggly, look at the hottie type of girl, so this really bugged me.  I felt like I was watching middle school girls crush on the cute boys, and it got to the point where I just wanted to smack Camden.


I also really struggled with the jumpiness of the plot.  What I mean by this is that something would happen, and then the next day it would be forgotten and then on to something else.  Then, it would be brought back days or weeks later.  I felt like the progression of the plot was nonsensical and slow, and I got to the point where I skipped entire pages because I just knew nothing was going to happen.  There were some parts where the plot had great potential—when Camden was seeing people in the middle of the night or when she was having sort-of visions where her friends morphed into something else, but these weren’t really developed enough.  I wanted more of these scenes and more action, but they hardly ever came.


This book was definitely more of a MG book, and I think that younger readers will enjoy it because there is mystery (although very predictable) and situations that would appeal and relate to a younger audience.  Older YA readers might want to skip this one, though.


I really wanted to like this one because the cover was great, and the synopsis sounded like there was going to be some major paranormal events happening.  Add that to the fact that mythology plays a role (minor spoiler but you find out after a few chapters), and I thought that this one was going to be fun.  Sadly, it just didn’t have the action and romance to keep me interested.
Posted by Jennifer @ YA Sisterhood at 12:01 AM