Waiting on Wednesday is a weekly meme hosted by Jill over at Breaking the Spine. It spotlights books that have not yet been released, but ones that you should pre-order today! This week's book that we are anxiously awaiting is MISTWALKER by Saundra Mitchell.   MISTWALKER releases on February 4, 2014 from Harcourt Press. 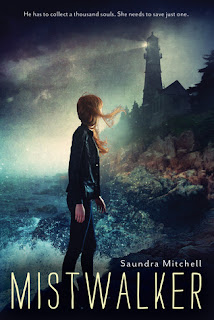 When Willa Dixon’s brother dies on the family lobster boat, her father forbids Willa from stepping foot on the deck again. With her family suffering, she’ll do anything to help out—even visiting the Grey Man.

Everyone in her small Maine town knows of this legendary spirit who haunts the lighthouse, controlling the fog and the fate of any vessel within his reach. But what Willa finds in the lighthouse isn’t a spirit at all, but a young man trapped inside until he collects one thousand souls.

I was definitely drawn to this one because of the gorgeous cover, but after reading the syopsis, I am definitely lookig forward to it.  A boy who has to collect a thousand souls?  It sounds like a gothic horror book--which I love!!!!