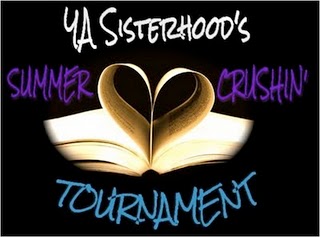 First off let me start by saying thank you, thank you, thank you to all our wonderful advocates!  You were UN-FREAKIN-BELIEVABLE!!!  You guys turned this tourney it to something we could have never dreamed up in our wildest imaginations!!!  You sacrificed sleep, time, money, your book collections, and so much more, all for the love of these amazing characters!  We love you and are counting down the days until the next tourney starts!  We can't wait to spend another month and a half with all of you!  Anyone want to meet for a YA Crush Tourney reunion?!?!?

We love our advocates, but not one of us would be here if it wasn't for our amazing authors!!!  Every author in this tourney has created characters that are so much more than fictional!  If only there was a spell to make them literally step off of the page!  Between teasers, deleted scenes, dirty sexy scenes not just from Cassandra Clare (I seem to remember reading a certain shower scene), donations to charities, donating books and other swag, signing books, staying up all night, and crazy other incentives, the authors brought this tournament to a whole new level!  Words simply cannot express how thankful we all are!

Now onto to the awards!  We have collected quite a little stash of amazing gifts!  Some of these are from us, others from advocates and some from the authors!  Thank you to everyone who donated these wonderful prizes!  This is what we have for the advocates:

All of our Tournament advocates will be receiving a little something, though we do have some larger, more significant prizes for the standouts!  Be on the lookout for our email!

Without further ado, we'd like to honor first the advocates of our Elite 8 characters!

Amy Green- Jace's Advocate- Amy (YA-Sisterhood) was not only an advocate for Jace, but was constantly spreading the word about each and every match via twitter.

Fictitious Delicious - Zachary's Advocate- Amy and Jen were goddesses of Rhyme, foreign language tweets, creative voting techniques, and the fearless leaders of Team Kilt!  They took their lastly seated Zach all the way to the finals!!!

Fiktshun-Tod's Advocate-Rachel was a force to be reckoned with!  Tod was seed 20, and she brought him all the way to the final 4!  That is such an amazing feat!  And, and big thank you to her for donating so many books for prizes!

Two Chicks on Books- Ash's Advocate- Jaime and Patricia were freezing out the competition with their boy Ash!  They also were crazy twitterers (is that a word) staying up all night cheering on Team Kilt!

Bookish Bethie- Kaleb's Advocate- Bethany L led her "sexy pirate" all the way to the elite 8!  Plus, Kaleb does not even show up in the book until half way through it!  Pretty dang impressive!

Bethany S (YA-Sisterhood)-Michael's Advocate- Anyone who compares Michael with Mr. Darcy in their defense definitely gets to be in the top 8!  I need a fan just thinking about both of them!  (Also a big congrats to Myra McEntire for having 2 crushes in the Excellent 8!)

Books over Boys- Patch's Advocate- Momo is the General of all Armies especially Patch's Army!  Plus, between videos, photoshopped pics, live actions pics, Momo also gets the Multimedia award!  You are definitely the most tech-savy of us all!

Deanne-W.W. Hale V's advocate- Deanne wins the coolest librarian I've ever met award!  Seriously, what other librarian do you know that would be in the YA Crush Tourney?  Greatness!!!

***All of our Elite 8 advocates will be receiving an email about your prize, so be on the lookout!

And now for a few miscellaneous awards:

The Numb Thumbs Award- For the voting machine that is Brooke Reports (Jule's advocate)!

The Incentive Queen Award- In a true act of sacrifice for Team Kilt, Melissa (St. Clair's advocate) (@3fixedhearts) offered to wash cars in a bikini in exchange for guy votes! Now that is commitment!

Advocate
Wins
Award with
Rocking
Descriptions-
Marylee Carney represented FOUR with a series of Acrostic Poems! She basically defended her guy, but only with words that started with F, O, U, or R. Talk about working within confined limits!

The Articulate Advocate Award goes to Claire, Will Herondale's advocate! Despite losing out in the first round to Zachary (the 2nd place winner), Claire's defense was well-written, simple, and convincing! Bravo!

The Author Appreciation Award goes to Carli, (@Emberchyld)! Amy Plum herself was so pleased with her defense of Vincent that she is offering up an ARC of Until I Die for Carli's excellent defense!

The Verbose Advocate Award for the lengthiest defense goes to Alice, Peeta's Advocate!

The Pinch Hitter Homerun Award goes to Amanda, Jack's Advocate. She stepped in at the last minute, delivered a defense that was just as strong as those who had days and weeks to prepare, and led Jack to a victory!

The Buffy Award goes to Amy D-- Tucker's Advocate! She took a relative unknown, and helped him to slay the famous sparkling vampire that is Edward.

Award Winners-- you'll be receiving an email soon about your prizes! Congratulations!

***Also, be sure to check back often!  We will be posting an interview with Jace soon, speaking with him about winning the YA Crush Tourney!  You know that you don't want to miss that!!!

Posted by AmyG@YA-Sisterhood at 1:18 AM