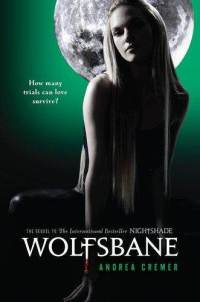 Reviewed by: Baby Sister Brittany
Release Date: Already on the shelves!
The Sisters say: Puzzling, Worrisome, but Readable
Gosh, I think I might be actually incapable of writing this review. Does anyone else find it hard to write a review for a book that you’re really really addicted to? I feel like I’m so obsessed that I might not have the clearest opinion, but I've tried.
SPOILER ALERT!!! THIS IS THE SECOND BOOK IN THE NIGHTSHADE SERIES, DON’T READ IF YOU HAVEN’T READ NIGHTSHADE!

I’m obsessed with this series. Okay, okay, you caught me, I’m obsessed with Ren.  I enjoyed Wolfsbane. I sat down to read while waiting for a phone call, and before I knew it, I’d read the entire thing. However… that being said… it was not nearly what I hoped it would be.
This book started a little slow. There was a lot of backstory because if you read Nightshade, you know that everything that Calla thought she knew turns out to be wrong. So in the beginning, Calla has to be filled in on an entire alternate history. Andrea Cremer reveals most of the backstory via dialogue. And most of that dialogue comes through characters that we are meeting for the first time. So the info-dump combined with unfamiliar characters makes the first 60 or so pages a little tough to trudge through, but hang in there! The new characters are interesting additions to the story!
Even though Calla and Shay are together and alone, she’s still wavering between him and Ren.
Ah, Ren.
There was not nearly enough of him in this book. And when you do see him—well, something happens that makes it not as enjoyable. I don’t want to spoil anything, but I have to say that the twist with Ren (which you will recognize when you read it) felt totally false to me. It felt out of character, and more like a way to try and lessen the army that is Team Ren.
Like I said… this book was an interesting read (once I got into it), but only half as good as I had hoped it would be. And I’m terribly afraid that the series as a whole is going to disappoint me.
Although, I will say that the sample first chapter of Bloodrose that is already on the internet is awesome, and gives me a little bit of hope.
I don’t want to give too much away, but I will say that if you loved Nightshade, you should read Wolfsbane as well!  The book definitely has some of the usual book 2 issues—feels like a build-up for book three, not a whole lot resolved, etc, but I think it will be worth the wait for the last book (I hope, I hope, I hope)! And no matter what… you have to read the first chapter of Bloodrose released on EW.com when you finish.  It will have you dying for the last book to come out already!
P.S. I really want the old covers back. :(
Posted by Brittany Howard at 8:00 AM