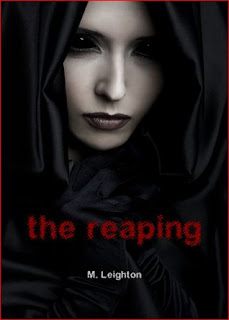 Summary (From Goodreads.com):
Every hell has its devil. And Carson is about to become intimately acquainted with hers.

Seventeen-year-old wallflower Carson Porter has always dreamed of being something special, but what she gets isn’t what she signed up for.

Yeah, a girl’s supposed to change as she gets older, but this is ridiculous! Shiny skin, greener eyes and a run-in with the flesh-eating dead are just a few of the changes Carson has to adjust to, not to mention the arrival of very hot and very dangerous Derek Hrolf. If all that wasn’t enough to turn her once hum-drum life into something unrecognizable, a twin sister that haunts her from the shadows and a wheeling, dealing collector of souls will definitely do the trick. The question is: what will her life become? And what will she become?

As this is my first official review for the Sisterhood, I would like to be able to give a rational, coherent, balanced account of The Reaping. Unfortunately, I can’t do “balanced” because this book is just to. Freaking. Awesome. I only have positive things to say because this book was just amazingly, incredibly good. What exactly made it so good, I hear you ask? Well I'll be happy to break it down for you. I've decided to put it in a top five format. Honestly I could do a top ten or top twenty, but I’m afraid I would go into to much detail and would be spoilery. And to spoil a fantastic story like this would be a crime.

1. The Characters. Carson, oh my Carson. This lovely, once-shy girl gets a lesson in “be careful what you wish for.” Who hasn’t dreamed of getting a more exciting life while in the clutches of boredom? Well Carson does and she is rewarded with flesh-eating monsters, an evil twin, and a tale reminiscent (but more intense) of Faust. She is a strong heroine who goes through an emotionally and physically tough journey, yet she remains true to herself. And although she falls for a boy, she doesn't rely on him to save her or make her whole. She is entirely her own person and can take care of herself. But now that we’re speaking of this boy, Derek, you should know that he is really a hot piece of man with unbelievable powers of his own. His tough exterior gets shattered by Carson & he does the unthinkable to protect her. I find in most YA that the protagonist & her beau are really well-developed, but most of the secondary characters can come off as two-dimensional. Well not in this book sister. The supporting characters in this book are as flesh and blood to me as Carson & Derek became. I know Leah, I know Carson's father, I have parents like the Kirby’s, all of the characters are as well-crafted as the protagonist & it helps you fall even more in love with the book.

2. The Paranormal World that is created in The Reaping is absorbing. Mainly because it happens right on top of our normal, muggle world. It is just beyond our fingertips, almost as though we could reach out & touch the dark world that Carson finds herself thrust into. And the villain(s)! As far as villains go, Grey & Fahl are as creepy & evil as it gets! They are deliciously dark, so if you scare easy you might have to sleep with the lights on... Beyond that, there are no vampires or werewolves or anything common to YA in this story. We’re dealing with reapers here, and although I know that’s been done too, it hasn’t been handled in the same way. Leighton makes this concept all her own and had me in a fit (a good one!) with her use of the four elements and of other supernatural powers employed throughout the book.

3. Mystery & Violence are both prevalent in this story. I mean there are so many things to figure out, that your mind races with the plethora of possibilities the story could contain. It makes you think while you read! Imagine that! You are racing right along with Carson trying to make sense of the world and everything she has been plunged into. And there is violence. What Carson encounters is a very dark place & she ends up fighting not only for her survival, but for those that she loves, so there is action and there is loss. Although for me, the violence never seemed gratuitous, there is a purpose & a reason for what happens in the story. It's not just for shock or entertainment value, it means something.

4. Romance. What's a YA book without some l-o-v-e? And this book has about the steamiest & most complicated romance I've ever seen. And thank the Lord above, there's no love triangle...yet. ;) It's just Derek! (I’m actually a huge fan of love triangles, but they seem to be such a staple in YA, that I’m glad for a break from it) Some might find the romance a little too steamy, especially if you're a parent reading something before you allow your child to, but the physical stuff that Derek & Carson get into is tame to what most teenagers are doing in real life. And most importantly, everything they do comes from love, so it is not just lustful hormones Carson and Derek act on, but what is in their hearts.

5. Saving the best for last, one of my absolute favorite things about this book is the Writing. Leighton had me at the prologue, and didn’t even let go after I had read the epilogue. She writes beautifully, with depth, grace, and humor and is truthful and real to Carson. She handles dark subject matter with skill and maturity, and has a way of showing the importance of hope, love, and faith even when all seems futile. She is an independent author who has self-published several books all on her own. You can (and should!) follow her on her blog at http://mleightonbooks.blogspot.com/ or follow her on twitter at mleightonbooks. I can hardly wait to read not only the next books in the series, but all of her books. Yeah, she’s that good.

I’ve read some reviews by people who have complained that the world of The Reaping and the reason(s) that Carson's change happens aren't clearly explained enough. I can understand this, but I believe that it is because The Reaping is the first in a series. Leighton has left herself plenty of room to continue and elaborate on the world and Carson and I trust her to answer all questions one might have throughout the entirety of the series. You can't give away all your goodies in the first book!

It has been said that the best books are about either love or death. Well people, The Reaping has gobs of both! And the best book bargain you’ll ever make is that it is available for $0.99 on your Kindle (available on Amazon)! I seriously cannot recommend it enough & I hope you take the time to discover this wonderfully written story.