The Grande Finale: Jace vs Zachary (Match #24) goes to Jace!

We have reached the final match in the 1st Annual Summer Crushin' Tournament! What started out as a silly, fun thing to try between my sister and I has exploded, and been more popular than we could have every imagined. And it's all thanks to you guys! Please, if you haven't already, see the post above this one to give us feedback on future YA Sisterhood Tournaments!


We are so excited to have Zachary and Jace in the finals! We couldn't have asked for two better guys! The winner will receive glory and praise and will reign as the YA Crush of all Crushes, and will be featured prominently on this blog until it's time for the next YA Crush Tourney! That winner, will go down in history (erm... our blog history?) as the 1st winner of the Tournament, but after that will no longer be eligible to compete in future YA Crush Tournaments. Both of these boys are epic and amazing enough that they could take it every year, and we'd like to spread the love. So vote for who you want to rule the world of Crush-dom for the next year!


Also, the characters aren't the only ones up to win something! We've been blessed to have some amazing bloggers and online friends act as advocates for these characters. They've sacrificed their sleep, time, energy, and thumbs to vote and spread the word for this tournament, and we want to thank them! Next Wednesday, August 17th, we'll be announcing the Advocate Awards for advocates we believe have gone above and beyond the call of duty for the Tournament! We've got signed books, arcs, posters, and plenty of swag, so make sure you come by and support this years' advocates. They rock!


I think you guys know the drill on the rest of this stuff, but one last time:

There may be some spoilers in the following post. We've tried to keep it fairly general, but overall, this Tourney will not be spoiler-free. So beware.

Secondly, You are welcome to write your own comments about either character in the comments section, but we will not tolerate rudeness. The minute it crosses over from logical argument into character bashing, your comments will be deleted and your vote canceled.  Voting will be open for 24 hours, 8am to 8am.  Without further adieu, let the match begin!!!


Jace Wayland (Seed #2)
Jace Wayland is rep'd by me, AmyG, from YA-Sisterhood.  You can check out my blog here, and follow me on twitter @YASisterhood.  Jace is from the Mortal Instruments series by the talented Cassandra Clare.  You can find out more info about her and her books by clicking on her name on our side bar.
Personality
I am going to borrow from the fabulous JKR and say, "JACE WAYLAND IS MY KING!!!"
I'd like to at first say that I began reading City of Bones in early 2008, and from that day forward Jace has been my number 1.  Other YA characters have come close, but none have been able to usurp Jace off his thrown!  The thing about Jace is he's that guy that comes across as cool, suave, good-looking, sarcastic and snarkie when in all actuality, on the inside, he's torn to shreds.  He's from as messed up a family as you can get.  He was emotionally abused by the most evil man since Voldemort.  This quote by Cassandra Clare from City of Bones basically sums up his childhood,"The boy never cried again, and he never forgot what he'd learned: that to love is to destroy, and that to be loved is to be the one destroyed."  How cannot every fiber of your being cry out to help him, to give him any amount of love to make up for the life he had endured thus far.  He hides his pain and his insecurity behind a "rapier wit".  He can word duel with the best of them, slaying you with his words one minute while cracking you up the next.  Out of all the amazing guys in this tournament, Jace is the most complex of all the characters.  In his case what you see is not necessarily what you get.  To get to the core of this hero, you must look deep and read between the lines. 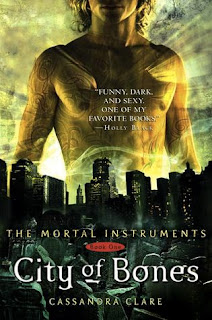 Close your eyes for a minute, picture a tall golden skinned guy, shirtless of course.  Across his chest and arms are these dark marks.  They look like perhaps symbols or characters from a time long ago.  His waist is lean and his chest and arms look as if they were chiseled perfectly by the gods.  His face is as beautiful as a fallen angel, angular and framed by wavy golden-blond hair.  His eyes are a piercing gold that seem ancient in his young face.  Do you need a fan yet?  Yep, that's Jace!  Pretty irresistible, huh?!?  Seriously, how can anyone turn turn down a tall golden haired bad boy with tats?  I'll take 2 please!!!
Talents
Without being too spoilery, there are some questions about the actual birth of Jace.  Who is parents are, what happened to him in womb or shortly thereafter.  These questions arise because even Jace's superpowers have superpowers! He can run faster and jump higher than any other nephilim.  He's basically like a Shadowhunter Limited Edition!  He's also one of those guys that every girl swoons over.  He walks into a room and all eyes are on him!  If your wondering why this is under talents, sit back and people watch for awhile!  You will notice that there are very few guys that actually have this talent, and Jace has it in mounds!  Lastly, I will have to mention his snarkiness under this category.  In order to be truly witty, it takes talent.  You must be fast on your feet and prepared for a comeback at any moment.

"What are all these?" Clary asked.
"Vials of holy water, blessed knives, steel and silver blades," Jace said, piling the weapons on the floor beside him, "electrum wire - not much use at the moment but it's always good to have spares - silver bullets, charms of protection, crucifixes, stars of David-"
"Jesus," said Clary
"I doubt he'd fit."
"Jace." Clary was appalled." City of Bones

Special Attributes
Jace is a shadowhunter or nephilim, part human and part angel.  He's actually descended from the offspring of angels and humans mentioned in Genesis 6.  He has incredible powers, powers enough to police the downworlders: vampires, werewolves, witches, warlocks, faeries, and demons.  Shadowhunters also have the ability to mark themselves with ancient runes for protection, healing, or added super-abilities.  Their purpose is to protect the mundanes, normal humans, from the downworlders.  So, they basically spend everyday saving the world!
Why is Jace better than Zach?
I honestly don't know where to begin on this!  I have voted #TeamKilt in every match that he was in so far!  I actually had not even read these until I read Fictitious Delicious's Limerick, after that I was sold!  I totally understood afterward, why he deserved a poem!   Sadly, if I'm really going to have to pick, its Jace!  For me, its always been Jace!  Zachary is perfect!  What you see is what you get from him!  He's the perfect, nice boyfriend!  On the other hand, Jace is the broken bad boy that every girl is dying to fix!  He's the sexy male that is hard and cold on the outside but just crying out to be loved on the inside!  So, be honest with yourselves girls, you know that's what every girl wants!  Plus, he saves the world from the bad guys!
Superhero + broken, bad boy dying to be fixed= WINNER!!!
One last thing: I dare anyone to read this scene from Jace's POV and not fall for him all over again!!!
It is spoilery bc its from the 2nd book, so proceed with caution!!!
http://cassie-claire.com/cms/bitter
Anything else you'd like to add?
Yes, if you have read the first Mortal Instruments you know the monstrous, gargantuan, colossal twist that occurs.  Okay, think about that for a second, and how you felt through the next books!  If you were like me, all of the great, huge, horrible sin of lets just say "I", suddenly didn't seem too bad anymore!!!  I was actually routing for it in my sick mind!  I totally just didn't care!  So, the last think I will say is that if it will make me and everyone else totally okay with "I" then he deserves to win every stinkin' contest that he ever enters or is entered into for the rest of time!!!

"I know it's wrong - God, it's all kinds of wrong - but I just want to lie down with you and wake up with you, just once, just once ever in my life."  -Jace (City of Glass)

"LOOKING BETTER IN BLACK THAN THE WIDOWS OF [HIS] ENEMIES SINCE 1234"!!!
Last round, Ms. Clare promised us The Spicy Manor House Scene if Jace won, and if you didn't see it yesterday here it is: http://cassandraclare.livejournal.com/57281.html  Whew!  I need a fan just thinking about it!!!
Vote for Jace!  Use the hashtags #Jace or #TeamJace to support him & to spread the word!
Zachary Moore (Seed #25)
Zachary is a character in Shade and Shift by Jeri-Smith Ready. You can learn more about the books by reading our review
Personality
In a city in Maryland they call Baltimore,
Is a hot Scottish boy named Zachary Moore.
He says funny words like ‘bugger!’ and ‘aye’
And has moments so sweet that it makes us cry.
He’s bold, strong, and smart, a science geek,
Writes shoddy love poems, has a competitive streak.
He’s real good at soccer, which makes him quite fit.
He’ll call you ‘bonnie’ when you’re feeling like sh… (bugger, can’t say that) …crap.
Looks
A once ‘doughy’ lad, with eyes of green,
Has hair of dark brown that he keeps nicely clean.
He’s got giant hands, and you know what they say…
And those dimples of his?  You can’t look away!
Talents
But of all his talents we surely can’t miss
Is the way this Scotsman knows how to kiss.
Now take it to the bridge!
Would he, could he, in a box?
Yes, and it’ll rock your socks!
Would he, could he, in a river?
Yes, and it’ll make you quiver!
He will kiss you here and there,
Why, he will kiss you everywhere!
Special Attributes


For attributes, his accent is first on the list.
Watch him roll those R’s… yeah, you get the gist.
His mere presence will ward off those pesky ghosts
Which comes in handy when they bother you most.
And let’s not forget to mention the kilt,
Which fits on that body, so nicely built.

What makes Zachary better than Jace?
C’mon, does it really matter what we say?
Y’all love Jace like he loves Clary Fray.
And with good reason, but please keep in mind
You have another choice, for which many have pined.
So just what is it that keeps Zach in the game?
Is it the accent? His wit? Lack of shame?
Aye, it’s all that, plus so much more.
He’s one who loves deep. Down to his core.
So remember, this isn’t about popularity
A vote for Zach is one for sincerity!
Anything else you’d like to add?
Remember that Zachary is lastly seeded,
So your vote for him surely is needed!
Jeri Smith-Ready has promised a teaser
If Zachary wins! So don’t vote at leisure!
Vote NOW for TEAM KILT for best crush fictitious,
(And then see our blog, Fictitious Delicious!)
Thanks to you bonnie lasses at YA Sisterhood!!!

Posted by AmyG@YA-Sisterhood at 8:00 AM