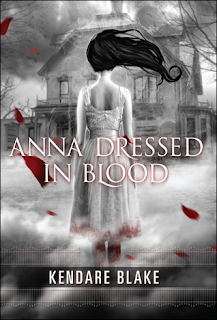 Summary from Goodreads.com: Cas Lowood has inherited an unusual vocation: He kills the dead.

So did his father before him, until he was gruesomely murdered by a ghost he sought to kill. Now, armed with his father's mysterious and deadly athame, Cas travels the country with his kitchen-witch mother and their spirit-sniffing cat. Together they follow legends and local lore, trying to keep up with the murderous dead—keeping pesky things like the future and friends at bay.

When they arrive in a new town in search of a ghost the locals call Anna Dressed in Blood, Cas doesn't expect anything outside of the ordinary: track, hunt, kill. What he finds instead is a girl entangled in curses and rage, a ghost like he's never faced before. She still wears the dress she wore on the day of her brutal murder in 1958: once white, now stained red and dripping with blood. Since her death, Anna has killed any and every person who has dared to step into the deserted Victorian she used to call home.But she, for whatever reason, spares Cas's life.

I have been waiting for this book to come out for a while because of the list above and it did not disappoint. If you’re in the mood for a violent yet romantic story full of snark, interesting characters, mystery, and really fabulous writing then look no further.

Where do I even start on this book’s amazingness? How about with a personal confession? A serious flaw that I have when reading is that it is really difficult for me to connect with a male protagonist. (The Maze Runner trilogy, I am Number Four, Beautiful Chaos etc… I feel nada for the male characters of these books, and my feelings, or lack thereof, for the books suffer) The only books where I’ve ever truly loved and connected with a male lead are the Harry Potter books (Rowling is my Queen), Jude the Obscure, and The Reader. I truly love these books and I think my love for them is heightened because they achieve what no other books have for me. Romantic interests, secondary male characters, and novels with dual narrators I love, but if the story is led solely by a male character I usually lose interest, and I’m not sure if that’s a failure of the writers I’ve read, or in myself for not being open-hearted/minded enough to connect to someone of the opposite sex… All of that to say, Anna Dressed in Blood has joined the ranks of my male-protagonist loved books, because I LOVE and adore Cas.

He’s hunky, intelligent, funny, and he hunts ghosts… what more could you want? Oh, you want him to be romantic? Well don’t you worry, he becomes that as well too… eventually. I mean this sweet hunk of man has been through so much; his father’s gruesome death, a huge and extremely dangerous legacy he feels he must live up to, and the burden of keeping everyone at a distance so he can focus on his work; the result of which is never having had a true friend. Yet Cas remains a selfless protector for people against dangerous ghosts, and behind his bad@$$ exterior he has an exceptionally large heart. I love my boys beautifully broken, which Cas is, but he never comes off too angsty even though he has every right to be.

And Anna, oh my Anna. Who doesn’t love a girl who can (literally) rip a guy limb from limb? I know I do. And Carmel and Thomas were pleasant surprises as compelling, fleshed-out secondary characters. The way they work together with Cas helps him to learn exactly what friendship is and how important it can (and should) be.

The premise is rather simple. Cas kills murderous ghosts. Anna is a murderous ghost. Therefore, Cas tries to kill Anna. The thing is, Anna is unlike any ghost Cas has ever faced. No one knows how she died or what gives her the immense and invincible power that she uses to murder anyone who enters her house. That is until Cas enters her house. She won’t kill him and despite his skill he cannot kill her, so their encounters end in a kind of stalemate. And what if he shouldn’t kill her? Mystery, creepiness and gore abound in this novel that is as tightly fraught with suspense and action as it is with excellent character development, an incredible and original storyline, fantastic twists, and an ending that will blow you away.

As a warning, there is some language in the book. And I gotta say, that’s another thing I love about this novel. The language is realistic to the characters and situations in this story. I often think it’s “cheating” when an author uses “she cursed,” “he cursed under his breath” and things of that nature instead of just coming out with it. Teenagers and adults curse. Not all of them of course (and if you don’t good for you) but people (like Cas) who grow up around violence and even most kids that go to public school or watch movies above a PG rating do or are at least around it quite often. I love the fact that Ms. Blake stayed true to her characters and didn’t shy away from putting the actual curses in knowing that it would most likely cost her some readers. I felt that it added a layer of reality to the story and made it feel like Cas, Carmel, Thomas, Will, Chase, and Mike could be at your school and that Anna’s house could be in your backyard.

This book is really scary in parts, so if you’re spooked easily you might need a snuggle-buddy to keep from being scared of the things that go bump in the night, but I promise it’s worth it! The end of the book hints at more to come and I desperately hope it does because I for one cannot wait to read more on Cas and his journey.
Posted by Marylee at 3:00 AM