Lola and the Boy Next Door by Stephanie Perkins 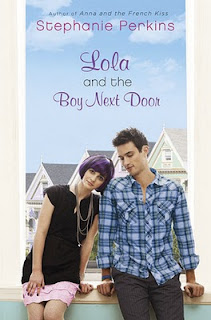 
Budding designer Lola Nolan doesn’t believe in fashion . . . she believes in costume. The more expressive the outfit -- more sparkly, more fun, more wild -- the better. But even though Lola’s style is outrageous, she’s a devoted daughter and friend with some big plans for the future. And everything is pretty perfect (right down to her hot rocker boyfriend) until the dreaded Bell twins, Calliope and Cricket, return to the neighborhood.

When Cricket -- a gifted inventor -- steps out from his twin sister’s shadow and back into Lola’s life, she must finally reconcile a lifetime of feelings for the boy next door.

Stephanie Perkins has hit one out to the park again, folks!  If you fell in love with Anna and the French kiss it will happen all over again in Lola and the Boy Next Door.  Most you know, this is a companion novel to Anna, to the relief of my heart, we get to see a lot of Anna and St. Clair!  Etienne is sexy and funny as ever, and its so fun to catch glimpses of how wonderful him and Anna are doing!  So many things struck a chord with me in this novel, but the ones that stayed with me the most would have to be the setting, Lola, and of course sweet sweet Cricket!

In Anna we had the backdrop of beautiful Paris.  I was wondering how Stephanie would top that, but lo' and behold, she did!  Lola takes place in the Bay area; however its their eclectic little neighborhood that draws you in this time around!  Its an artsy neighborhood filled with old historical houses.  The setting serves as a great backdrop for Lola's creative expression.  Stephanie Perkins has an amazing talent of making her world come to life in the pages.  I can close my eyes and picture Lola's house and her neighborhood as if it was laying out right in front on me.  I lived in Austin for 9 years before we moved to Oklahoma a year and a half ago.  There's a huge part of me that really misses the creativity and corkiness of Austin.  I know that this novel was not set in Austin, but her description of Lola's neighborhood reminded of Austin so much!  I felt so at home in the pages of her novel!  Its great to open up a book and have it relieve a bit of homesickness.

Lola, Lola, Lola, I am so in love with that name and the character!  Lola is a designer.  Okay, you say, so what, designers are everywhere now.  Everyone wants to be a designer, but Lola is it!  She is a creator.  She can create something from nothing.  At the beginning of the book, she says that her goal is to never where the same thing twice!  No, she's not a rich spoiled girl that buys a million outfits.  She has a few outfits and literally turns them into something different else everyday!  Her outfits are always unique and bright and something completely different.  She reminds me of a smiley face sunshine.  Even if I had that kind of talent, I would never be brave enough to wear the things she does.  She's brave and daring, and I love that she marches to the beat of her own drum.  She's also a character that has been forced to deal with hardship in her life.  She struggles through it and make mistakes, but she learns from those mistakes.  I was so proud to see how far she had come by the end of the novel!

Now for the boy next door part, Cricket.  Yes that's really his name!  I will probably never be able to kill another Cricket in my life!  Without getting to gushy, he's simply wonderful!  I love him, I do!  Normally, I'm a bad boy kinda girl!  Read all my reviews, and you'll see I always go for the bad guy!  Not here, ladies and gentleman!  Stephanie has made me go for the good guy!  How rare is it that we actually see a likable good guy though?  Cricket is not boring and is still very mysterious without being a bad boy.  He is a little broken though, so maybe that's why I liked him so much.  He's the broken, good guy!  But, with all kidding aside, it was refreshing, to have an intriguing good guy.  You don't always have to be a bad boy to be sexy!

This is definitely a book you should pre-order and read immediately!  Then sleep with it under your pillow and read all your favorite parts again in the morning!  Stephanie Perkins is a great talent that is creating unique novels with her stylized voice reverberating through the pages.  I can't wait to read more from her!

Posted by AmyG@YA-Sisterhood at 3:00 AM