Girl of Fire and Thorns by Rae Carson 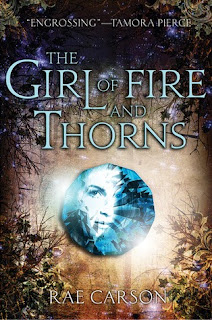 Once a century, one person is chosen for greatness.

Elisa is the chosen one.

But she is also the younger of two princesses, the one who has never done anything remarkable. She can’t see how she ever will.

Now, on her sixteenth birthday, she has become the secret wife of a handsome and worldly king—a king whose country is in turmoil. A king who needs the chosen one, not a failure of a princess.

And he’s not the only one who needs her. Savage enemies seething with dark magic are hunting her. A daring, determined revolutionary thinks she could be his people’s savior. And he looks at her in a way that no man has ever looked at her before. Soon it is not just her life, but her very heart that is at stake.

Elisa could be everything to those who need her most. If the prophecy is fulfilled. If she finds the power deep within herself. If she doesn’t die young.

Most of the chosen do.

It's been awhile since I've read anything more high fantasy and let me tell you, I was not disappointed with this one! It was exciting and different from the very beginning.

Carson has created such a dynamic and interesting heroine in this book.  Elisa is a princess who bears what is called the Godstone...a stone implanted by God in the navel of one person every 100 years or so.  Having this emblem signifies that that person is designated to do something significant to serve God and mankind.  Yet, Elisa is not your ordinary heroine. She is lazy, insignificant, and fat.  She struggles with her destiny and cannot imagine how she could ever fulfill what she has been destined to do.  Throughout the book you see Elisa develop into a woman...an extraordinary queen who is more than capable to fulfill her God-given task.  I loved the character development of Elisa. At the beginning I was semi-disgusted with her, but as time went by she became one of the most exceptional heroines I've read about in YA literature.

The world Carson creates makes an exciting backdrop for this tale.  Deserts, jungles, beautiful hill country, seas, and huge medieval fortresses are just a few of the awesome places you visit in this story as you encounter fierce natives, fire-throwing animagi, and child warriors.

There's not a moment of boredom in this one. And believe me, there are some shocking twists that will have you laughing, crying, and sitting on the edge of your seat!
Posted by sarah at 3:00 AM