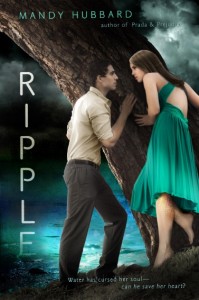 Ripple by Mandy Hubbard
Reviewed by: Baby Sister Brittany
The Sisters say: Seductive, Sweet, and Sinister—SIRENS!
Lexi is cursed with a dark secret. Each day she goes to school like a normal teenager, and each night she must swim, or the pain will be unbearable. She is a siren - a deadly mermaid destined to lure men to their watery deaths. After a terrible tragedy, Lexi shut herself off from the world, vowing to protect the ones she loves. But she soon finds herself caught between a boy at school who may have the power to melt her icy exterior, and a handsome water spirit who says he can break Lexi's curse if she gives up everything else. Lexi is faced with the hardest decision she's ever had to make: the life she's always longed for - or the love she can't live without?
I’ve been on a contemporary kick lately because I needed a break from all things paranormal. Ripple was the perfect book to jump right back into the genre.  Lexi is a siren, and this book was just enchanting and addicting as a siren’s song. I didn’t even feel like there was an option to put the book down. I was just so completely sucked in! This book is dark and seductive and completely worth your time!
Every night, Lexi feels called to the water. She must swim, or she’ll be weak and in pain the entire next day. But when she swims, she sings. And when she sings, any male nearby is drawn to the water, and drowns. To keep everyone safe, she drives far into the wilderness to swim in a pond that no one else can find. Except some one else does find it—Cole, the best friend of her former boyfriend, who she accidentally killed on her birthday.
Lexi is an interesting narrator. She’s not shallow or self-absorbed. In fact, when the book starts she’s sort of a punching bag for the other students in school, and she takes it because she thinks she deserves it. It can be a little depressing, but her attitude does feel realistic.
But then Cole starts to pull her out of that world, out of the guilt. Their relationship is downright addicting. But then another love interest appears, offering a solution to Lexi’s problem—a cure for her siren abilities. It’s possibly one of the most realistic love triangles I’ve read, because it’s a battle between Lexi’s mind and her heart.
A few moments in the book were predictable, but that didn’t change my enjoyment of it.
This story is as dark, beautiful, haunting, and seductive as the ocean that plays such a pivotal role in the book. I encourage you to dive in head first!
And I completely forgot to mention-- how beautiful is that book cover! A perfect fit for the book!
Thanks to Brooke Reports for the recommendation!
Posted by Brittany Howard at 3:55 PM