Embrace by Jessica Shirvington: A Review and a Giveaway! 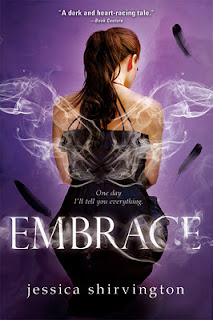 It starts with a whisper: “It’s time for you to know who you are…”

Violet Eden dreads her seventeenth birthday. After all, it’s hard to get too excited about the day that marks the anniversary of your mother’s death. As if that wasn’t enough, disturbing dreams haunt her sleep and leave her with very real injuries. There’s a dark tattoo weaving its way up her arms that wasn’t there before.

Violet is determined to get some answers, but nothing could have prepared her for the truth. The guy she thought she could fall in love with has been keeping his identity a secret: he’s only half-human—oh, and same goes for her.

A centuries-old battle between fallen angels and the protectors of humanity has chosen its new warrior. It’s a fight Violet doesn’t want, but she lives her life by two rules: don’t run and don’t quit. When angels seek vengeance and humans are the warriors, you could do a lot worse than betting on Violet Eden…

Look for the sequels ENTICED in September 2012 and EMBLAZE in March 2013!

You know... every time I think I'm tired of a certain trend-- a new book pops up that still manages to sweep me away! I thought I'd had enough of Angels, but sure couldn't get enough of Embrace.

Violet is a kick-butt heroine! She's independent, but not so independent that she's without weakness. She's witty, but not so witty that she's always knows exactly what to say. She's brave, but not without fear. She's attractive, but she's insecure. But... she's not so insecure that she's annoying. What I'm trying to say is.... she's real. I could see myself in her. She wasn't one of those heroines that seems to be good at everything, and is practically the second coming. On the flip side, she wasn't one of those heroines who is plain, but everyone treats her like she's amazing. She had all the right mix of attributes to make her an honest, relatable character.

Shirvington gives us a unique take on how her part-angels, known as Grigori, are created. Whenever the mom dies in childbirth, it creates an opening in the baby's... um, aura, I guess? Angels (either light or dark) then have the option of giving a piece of themselves to that child to make him or her a Grigori-- human protectors who wage battles against the fallen angels on earth. There's not a whole lot of religion involved in the book. The angelic realm is balanced by good and evil, and it's a mystery to the Grigori and to the angels, as much as it is to humans. There are a few big plot twists that will keep you hooked (though with the fast pace of this book, I don't think that will be an issue).

Okay... I've gotten some coherent thoughts in... SO NOW IT'S TIME TO TALK ABOUT THE BOYS. See what I did there? I held off as long as I could, really.

Alright. Let me try and real some coherent thoughts back in.

The boys in this book are some of the most swoon-worthy boys I've seen in a long time. If Lincoln doesn't make the YA Crush Tourney this summer, I will die. Unless Phoenix saves me.

Lincoln is Violet's friend. He's older, and they met in a self-defense class. Since then he's become her pseudo-trainer. He's that perfect, hot older guy, that seems out of your reach, but then does something to make you think otherwise. I won't tell you much about it... but there's this kiss... and GUYS. DANG. IT IS SOME KISS.

But when Violet realizes she's Grigori, and that Lincoln is too-- things start to fall apart. Just when it seemed that something might be happening between them, she learns nothing can, because it's not allowed.

Enter Phoenix. Fallen Angel. The very creature from whom she's supposed to protect humanity. But he's different (far different than she will realize until the end of the book). He is hotness incarnate. And he's there when Lincoln isn't.

Seriously. SWOON. BOTH OF THEM. BUT MOSTLY LINCOLN.

And do you know what the best part is? This is a trilogy, but Sourcebooks has scheduled the releases only 6 months apart. Which is good, because I'm suffering from Lincoln withdrawals already.

Oh, wait, I almost forgot! Do you know what the even better best part is???

I HAVE A COPY OF THIS BOOK TO GIVE AWAY TO YOU FOR FREEEEEEE!