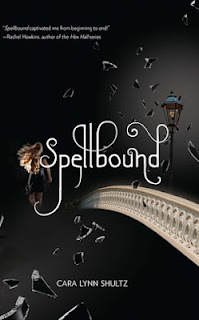 But even when Brendan inexplicably turns cold, Emma can't stop staring. Ever since she laid eyes on him, strange things have been happening. Streetlamps go out wherever she walks, and Emma's been having the oddest dreams: visions of herself in past lives—visions that warn her to stay away from Brendan. Or else.

Spellbound is enchanting—from the first chapter I was hooked!  You’ve got the Charmed type of witchcraft, the Cinderella type fairy tale, and the Vampire Diaries type sexy guy! Add all ingredients, put in a blender, and what do you get?  A book that will truly keep you “spellbound” until the next installment!
I really enjoyed the different characters that Cara Lynn Shultz melds together.  You have Emma who, at first is the type of girl who shuns away from confrontation, but then as she is constantly picked on at the posh private school she attends, she begins to break out of her shell.  I’m not sure “break” is really the word, even, more like lashes out of her shell and charges anyone who gets in her way.  It’s great to see Emma’s confidence in herself build, and it’s even greater to see her start to stand up to Kristin (the resident, rhymes with smee-ootch) of the school.
Then you have Angelique—the resident emo witch of the school who I absolutely adore!  She’s so spunky and from the moment I met her, I couldn’t wait to see how her character developed.  Besides Brendan (who’s my favorite because let’s face it…he’s an overprotective hottie with parent issues…yum), Angelique is definitely my favorite character.  I can’t wait to see what awaits her next!
Okay…drum roll please…..Brendan!
Give me a moment to form my thoughts….because right now, all I’m getting is:
BRENDAN!!!!  OH LA LA!!!!!  BRENDAN!!!!!  EEEEEKKKK!!!!!    BRENDAN!!!!!
Where to begin?  He’s got dark hair and mesmerizing green eyes that literally take your breath away.  He’s tough as nails—winning every fight he gets in to, seriously, Cara Lynn Shultz should put him in a fight club—the only thing that could make this guy even hotter!  His parents are practically “The Queen” type of rich, and the parent issues are obvious from the get-go.  But who doesn’t love a guy that’s a rebel?  What else?  He’s crazy protective—which I love even more!  The scenes where Brendan sticks up for Emma are the absolute best in the book!
You know, it’s not very often that I find a book that quite literally speeds up my heartbeat.  I found myself growing increasingly nervous as things became even more dangerous in the book.  Even now, thinking back on it, I feel my heart beating a little faster—and I know how it ends!
Now, there are a few flaws.  Namely, I wish we would get more details about Emma and Brendan’s relationship (it’s pretty G rated)—there’s only so many kisses I can read about before I scream, “Come on!  More!”  But, maybe Cara Lynn Shultz is saving that for the future.  I also wish there would be a few more plot twists (there were some aspects of predictability).
As far as content goes, the only thing you might be wary about is the underage drinking (which there is quite a bit), and some violence against women.  But truthfully, I wouldn’t mind my teenage daughter reading this one.
If you haven't read this one, you definitely need to check it out.
Posted by Jennifer @ YA Sisterhood at 12:01 AM