MAY I HAVE YOUR ATTENTION PLEASE!!! We have some crazy, amazing news for all of you!  We are having a mini tournament to determine who is your favorite Jennifer L. Armentrout character!  This is all in celebration of the release of Pure, the 2nd book in the Covenant Series. The tournament will consist of 16 characters, 8 from the Covenant Series and 8 from the Lux Series.  The character's will face off in another YA-Sisterhood tournament to determine who has the right to hold the title of fan favorite!  The characters from their respective series will first battle each other to determine the favorite character from each series.  Then the 2 favorites will face off against each other in the grande finale!  To help us kick off this tournament, we need all of you to tell us, who you want to be in this tournament.  Please nominate 8 characters from each series.  The number of nominations each character receives will determine the seeds.  The nominations will only be open until 10pm Sunday night, so spread the word to insure your favorite character is in this tourney!

NOMINATIONS ARE CLOSED! Here's are the characters you nominated in their respective spots: 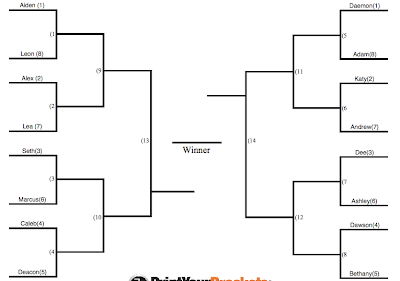 Matches will open at 12:01AM and close at 8PM CST on their respective dates.  We are not having advocates in this tournament, so all of you feel free to rally the troups and support your characters in the comments.  Remember above all that this tournament is to celebrate ALL of Jennifer's characters.  If there is any slandering, character bashing, cursing, or anything else we deem inappropriate, we reserve the right to delete your comment.  Let's have fun, cheer on our favorite characters, and show Jennifer how much we love her!!!

*If you have any questions, leave them in the comments, and we will answer them there.*

Here is the schedule of the tournament:

Posted by AmyG@YA-Sisterhood at 12:36 AM