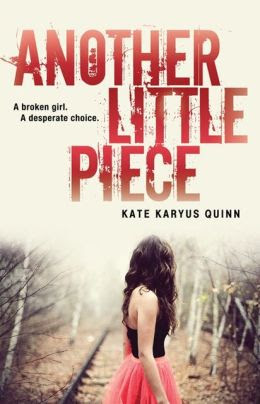 
I love and hate horror movies.  I love them because I like being on the edge of my seat, waiting for something to jump out of the dark corner; but I hate them because inevitably, as soon as the lights go out, here come the nightmares.   So my solution?  Never watch horror movies.  So, I haven’t watched a horror movie in years, and I have started to miss them.  And then lo and behold, horror starts becoming a trend in YA books!  Problem solved.  I love this growing trend because for some reason,  books can be scary and thrill me without causing nightmares.


So when I saw Kate Karyus Quinn’s debt novel a couple of months ago, I knew it was one I was going to want to read; and it definitely delivered.  Kate’s world was grisly—soaked in the blood of recklessness and evil.  With every new memory Annaliese regains, the truth becomes more daunting and more grotesque.  Fans of Kendare Blake will love this one.


From Chapter 1, I was pulled right into the twisted world of deception and brutality.  Kate’s descriptions (while overly detailed at times) were hauntingly beautiful and terrible at the same time, and I found myself lost in a maze of shadows.  Annaliese was a great mc for a horror novel because she had this brokenness to her that made you want to feel sorry for her, but at the same time, she had an air of coldness that sent my teeth to chattering.  She was a completely unreliable narrator which made the tension much more palpable.  I also liked that I didn’t take a liking to her.  Does that make sense?  She’s made horrible decisions in the past and there is a part of her that would scare the dark side of the moon.  Her treachery and darkness made her a great character to both love and fear.


Now the bad guy (well, one of them) really disgusted me.  I won’t say much about him because it’s too spoilery, but let me just say, he definitely triggered my gag reflex.  His words and actions were manipulative and sociopathic; and seeing how much he enjoyed pain and suffering totally gave me the heebie jeebies.


The only thing that really bothered me was the length of the story.  I really enjoyed it, but I got to a point where I wanted it to hurry up and end so I could see how everything was going to either work out or go to hell.  I truthfully think it was a good 50-75 pages too long, and maybe that’s my attention span talking, but I had a hard time finishing it as quickly as I do other books.  Most books I read in 2 days, and this one took me 4 days to complete.  But then again, it might be because I couldn’t sit down and devour a book with so much grotesque imagery.


Overall, while it wasn’t my favorite ya horror that I have read, it was still a story that grabbed me and pulled me under.  The ending was both somber and cathartic, though, so while I was still left with an unsettling feeling from the tragic decisions, I wasn’t left thinking, “Wow, sucks to be her.”  If you are a horror fan, then you should definitely check this one out.
Posted by Jennifer @ YA Sisterhood at 12:01 AM