Four/Tobias from Divergent by Veronica Roth

“Two things you should know about me; The first is that I am deeply suspicious of people in general. It is my nature to expect the worst of them. And the second is that I am unexpectedly good with computers.”

Now make sure to VOTE for Four as much and as often as possible and let's take Four to the top of the YA Crush Tourney!  :) Show your support on Twitter, Facebook, your blog, etc. You can follow me on Twitter at @GeckyBoz and make sure to use the #TeamFour tag so I can see all your tweets.

Hello fellow bookworms! My name is Caitlin and I'm from The Y.A. Bookworm Blogger! Today I'll be using my extreme fictional male loving skills to advocate Ash to victory! Ash is from the fabulous Iron Fey series by Julie Kagawa and if you haven't read it yet, then I'm sure the following information about the yummy Ash will convince you to read these books ASAP! It's from the first YA Crush Tourney that I discovered this series, so to me, advocating Ash is like coming full circle ! Warning! Extreme faint worthy quotes ahead! Ice cold water from the Winter Realm recommended ;P
Looks
Tall, muscular, silver eyes, long dark hair, pale skinned and swoonderfully good looking....*sighs* do I have to go on? Ash may be an Ice Prince but that doesn't mean he lacks in heating things up!
Ash mused as I whirled around. His eyes, cold and inhuman, glimmered with amusement.  Up close, he was even more beautiful, with high cheekbones and dark tousled hair falling into his eyes.
Personality 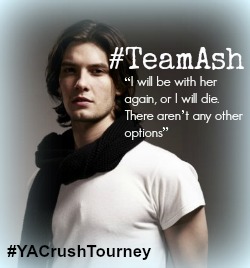 Ash may be cold when we first meet him, but there's no doubt that underneath that sexy icey exterior is a tortured soul and guy who feels everything so deeply. Growing up in the Unseelie Court taught him to close his emotions off, that is, until a certain someone comes into his life and begins to open him up again. It's from this vulnerability that we really get to see that Ash is a genuinely good person inside and out (which makes him even hotter, may I add).       Threaten Ash or the people he loves and he won't hesitate to slice you to pieces, but capture his heart and he'll be there for you like no other! Ash's intense devotion and love for Meghan ruins future boyfriends for bookworms everywhere! Oh and how can I forget to mention how he will melt your heart with the simplest of lines.....
"You're here," I murmured, reaching out to touch him, hardly believing this was real. "You came back."  Ash's breath hitched and he put his hands over mine."I came home."
^^^ Like c'mon?! That's perfection right there!
~~~~~
I licked my lips and whispered, "Is this where you say you'll kill me?"
One corner of his lips curled. "If you like," he murmured, a flicker of amusement finally crossing his face. "Though it's gotten far too interesting for that.”
Talents
Ash may be stunning and make you swoon into a puddle of goo, but he also has some wicked skills that make him both unique and add to his crush-worthiness. He's an expert swordsman that can take on any competitor without breaking a sweat and has the power of Winter glamour at his fingertips. You never quite know when Ash just might send an ice shard at your face...just ask Puck ;)
“Touch her, and I'll freeze your testicles off and put them in a jar. Understand?”
~~~~~~
"But...but what if I hit you?"  A snort. "You're not going to hit me."
"How do you know?" I bristled at his amused tone. "I could hit you. Even master swordsmen make mistakes. I could get a lucky shot, or you might not see me coming. I don't want to hurt you."
He favored me with another patient look. "And how much experience do you have with swords and weapons in general?"
"Um." I glanced down at the saber in my hand. "Thirty seconds?"
He smiled, that calm, irritatingly confident smirk. "You're not going to hit me."
~~~~~
There's no doubt that Ash's looks, personality and talents (combined with his complete and strong love for Meghan) are what make this Ice Prince the obvious winner for this tournament! Feared warrior, passionate lover and heart melter are just a few of the diverse descriptions that can be given to Ash. He may be a complicated character, but you won't be able to get him out of your head after devouring each and every Iron Fey novel.

Email ThisBlogThis!Share to TwitterShare to FacebookShare to Pinterest
Labels: 3rd Annual YA Crush Tourney, four vs ash, ya crush tourney #3, YA Sisterhood
Newer Post Older Post Home
Three sisters (and some honorary ones) share a love of YA literature, review new books, and talk old favorites.