Hey this is Stacey and Pixie from Page Turners. Stop by and check us out sometime. Warner isn't the normal type of guy PTB advocates for - in fact, his competition is more our style.  But we hoping we'll be able to sway your vote to Warner.

Warner is a bad guy, you know he is the bad guy, but you just don't care.  There is just something about Warner, we can't explain it...

We decided to give you little glimpses(quotes) into the mystery that is Warner. We'll admit at first he is quite infuriating - that is, until you get to know him, know his history and then you realize - He is smart, strong, loyal to a fault, loves his mama and would do anything for Juliette. Even if it means humbling himself to prove he is worthy of her love.

Also, by using quotes we get to show you how beautifully and uniquely written these books are... 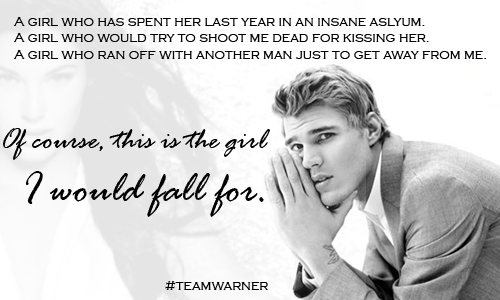 “His smile is laced with dynamite. "Go to sleep"

He works his jaw. Walks to the door. "I'm working on it.” ― Tahereh Mafi, Shatter Me

I see him smile.

It's the kind of smile that transforms him into someone else entirely, the kind of smile that puts stars in his eyes and a dazzle on his lips and I realize I've never seen him like this before. I've never seen his teeth--so straight, so white, nothing less than perfect. A flawless, flawless exterior for a boy with a black, black heart. It's hard to believe there's blood on the hands of the person I'm staring at. He looks soft and vulnerable--so human. His eyes are squinting from all his grinning and his cheeks are pink form the cold.

He's easily the most beautiful thing I've ever seen.

And I wish I'd never seen it.” ― Tahereh Mafi, Unravel Me

He says “Please don’t shoot me for this.”

And he kisses me.

His lips are softer than anything I've ever known, soft like a first snowfall, like biting into cotton candy, like melting and floating and being weightless in water. It’s sweet, it’s so effortlessly sweet. And then it changes.

He kisses me again, this time stronger, desperate, like he has to have me, like he’s dying to memorize the feel of my lips against his own. The taste of him is making me crazy; he’s all heat and desire and peppermint and I want more. I've just begun reeling him in, pulling him into me when he breaks away. He’s breathing like he’s lost his mind and he’s looking at me like something has broken inside of him, like he’s woken up to find that his nightmares were just that, that they never existed, that it was all just a bad dream that felt far too real but now he’s awake and he’s safe and everything is going to be okay and

I’m falling apart and into his heart and I’m a disaster.” ― Tahereh Mafi, Unravel Me

“I almost forget that she still hates me, despite how hard I've fallen for her.

I've hit the ground.
Gone right through it. Never in my life have I felt this. Nothing like this. I've felt shame and cowardice, weakness and strength. I've known terror and indifference, self-hate and general disgust. I've seen things that cannot be unseen.

And yet I've known nothing like this terrible, horrible, paralyzing feeling. I feel crippled. Desperate and out of control. And it keeps getting worse. Every day I feel sick. Empty and somehow aching.

Love is a heartless bastard.” ― Tahereh Mafi, Destroy Me

“If it were nothing but sexual attraction I’m sure I would not suffer such unbearable humiliation. But I wanted so much more than her body.” ― Tahereh Mafi

“I want so many things,” he whispers.

“I want your mind. Your strength. I want to be worth your time.” His fingers graze the hem of my top and he says “I want this up.” He tugs on the waist of my pants and says “I want these down.” He touches the tips of his fingers to the sides of my body and says, “I want to feel your skin on fire. I want to feel your heart racing next to mine and I want to know it’s racing because of me, because you want me. Because you never,” he says, he breathes, “never want me to stop. I want every second. Every inch of you. I want all of it.”   ― Tahereh Mafi, Unravel Me

“I want to be the friend you fall hopelessly in love with. The one you take into your arms and into your bed and into the private world you keep trapped in your head. I want to be that kind of friend. The one who will memorize the things you say as well as the shape of your lips when you say them. I want to know every curve, every freckle, every shiver of your body. 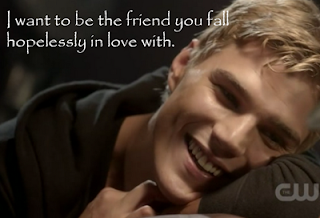 surveys
Posted by AmyG@YA-Sisterhood at 11:00 PM

Email ThisBlogThis!Share to TwitterShare to FacebookShare to Pinterest
Labels: 3rd Annual YA Crush Tourney, warner vs will, ya crush tourney #3, YA Sisterhood
Newer Post Older Post Home
Three sisters (and some honorary ones) share a love of YA literature, review new books, and talk old favorites.