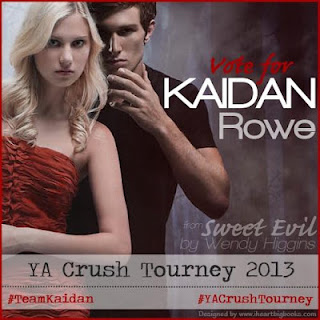 ATTENTION!
The Dukes have spoken and they are demanding action from YOU! Kaidan Rowe, son of Pharzuph, Duke of Lust, is up for 2013's Debut boy in the YA Crush Tourney and they are demanding that he win! You wouldn't want to upset Lucifer's head demons now... would you? Kaidan's up against some stiff competition so Pharzuph and the other Dukes have recruited me, Kayleigh from K-Books along with the #KaidanStreetTeam to tell you why he deserves to be crowned 2013's champion!

Kaidan Rowe is the hottest of the HOTT!

Kai is the son of the head demon of Lust... of course he is HOTT! What girl can resist the super gorgeous, confident, lustful Kaidan with his messy brown hair, blue eyes and ENGLISH ACCENT! Oh yes... you heard me... English Accent! Rather that tell you all about Kai... Let's see what Anna Whitt has to say... "Good gracious, he was sexy - a word that had not existed in my personal vocabulary until that moment. This guy was sexy like it was his job or something." He is TT worthy..."He was smokin' hot. As in H-O-T-T hott. I'd never understood until that moment why girls insisted on adding the extra T. This guy was extra T worthy." You can get lost in his swoon-worthy eyes... "Gosh, his eyes were gorgeous - the color of tropical honeymoon waters ringed in dark sapphire and enclosed by thick lashes" He even makes fruit sexy! "That's a shame," he picked up a green pear from his plate and bit into it, licking juice that dripped down him thumb. My cheeks warmed as I set down my glass. "Okay now you're just being crude." I said. He grinned with lazy satisfaction. Now don't tell Pharzuph and the other Dukes I said this but... *Looks around and moves closer*

Deep down Kaidan is really a sweetheart and uber Swoony!

Yes Kaidan may be the epitome of snarky sexiness but deep down he is a sweetheart and he always puts the ones he loves before himself. In his own words... "Anna... the night of the summit, when you were saved, it was the only time in my life I've ever thanked God for anything."*SWOOOOONNNNN* NO matter what, he is swoon worthy and wants to be better... "Because all I could think about was you, Anna, and how good you are, and what you'd think of me. You put thoughts into my head that a Neph should never have." He makes every girl want freckles... "What do you want from me Kai?" "For starters?" His voice lowered to sexy, dangerous depths. "I want to introduce myself to every freckle on your body."

DID I MENTION HE WAS THE SEXIEST NEPH AROUND?

His bedroom eyes... "Seriously" I whispered, unable to look away. "You're doing the bedroom-eyes thing again." He sleeps in the buff... "Dear God!" I screamed and buried my face in my pillow. "What?" I heard him ask. "Did you see a roach?" "Why are you naked?!" I did not dare to life my red face. "Huh. Is that all?" He asked. "I always sleep in the buff. I don't know how you can stand all that clothing." 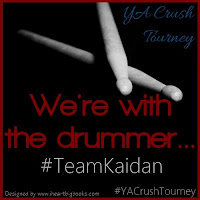 HE IS A KICK-ASS DRUMMER

Kaidan is the drummer in band Lavicious... "There was an intensity in the way he played, like he was unleashing his passion into the music and nothing else mattered. He was feeling it, lost in it, and he was good. A light sheen of sweat shone on his arms and face, dampening and darkening his hair at the temples." "Now, with the drummers' absence of aura, I was able to watch the muscles in his biceps and forearms flex as he slammed the drumsticks down in a whirlwind of precise movement. The beat was intoxicating, bumping each nerve ending inside of me. His whole body moved fluidly, jumping with the force of the beat, his face focused and sure."

He's even got girls writing poems and limericks about him!  Courtesy of @KatieOlley

So we know this real cute guy named Kai Who is so not the type to be shy He is H-O-T-T In the Crush Tourney he'll be So go vote for him and sigh for Kai!

You know he is epically awesome when girls are writing stuff about him!
Now I know you don't wanna get on the Dukes bad sides (all they have are bad sides) so.... Vote for the sexiest, most talented, musical, lustful Neph around. He created the word sexy, he is the epitome of HOTT, the secretly sweetest of them all, and the most swoon worthy of all of the book boys!

VOTE TEAM KAIDAN ROWE... ... or suffer the consequences of the Dukes' Wrath. You have been warned! 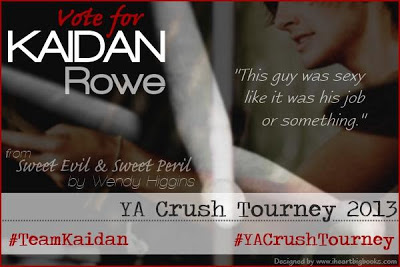 
polls
Posted by AmyG@YA-Sisterhood at 11:00 PM

Email ThisBlogThis!Share to TwitterShare to FacebookShare to Pinterest
Labels: 3rd Annual YA Crush Tourney, Kaidan vs Will, YA Crush Tourney, ya crush tourney #3, YA Sisterhood
Newer Post Older Post Home
Three sisters (and some honorary ones) share a love of YA literature, review new books, and talk old favorites.