The Winner of Match #22 is Dimitri!

Dimitri from The Vampire Academy by Richelle Mead

Hello everyone! *Waves* Welcome to the 3rd Annual YA Crush Tourney! I am Chandra from Unabridged Bookshelf and I have the great honor of representing the esteemed Dimitri Belikov this year! If I seem familiar, you may have seen me here last year representing another fellow from the Vampire Academy and Bloodlines series by the incrediably talented Richelle Mead, Mr. Eddie Castile. I had a lot of fun last year, and could not be more excited to have the chance to be an advocate again let alone for the gorgeous guardian Dimitri.

Dimitri is the knight is shining armor girls have been dreaming about for years. He is protective, noble, always willing to put his life on the line for those he loves and those he has sworn to protect. He takes his duty as Guardian for the Moroi (good vampires) very seriously, especially after losing his first charge and his best friend to the Strigoi (bad vampires).Dimitri is a true gentleman and most defiantly crush worthy.

Dimitri is tall, dark, and dreamy all wrapped up in a Russian accent. Dimitri stands just over 6’7” with dark soulful eyes, and long dark hair and he is incredibly fit. Don’t believe me, why not find out what Ms. Rose Hathaway has to say about Dimitri’s looks.

“The other problem in my life is Dimitri. He's the one who killed Natalie, and he's a total badass. He's also pretty good-looking. Okay-more than good-looking. He's hot-like, the kind of hot that makes you stop walking on the street and get hit by traffic.
Rose Hathaway-Frostbite

Dimitri has many talents including making girls melt around him. He is a fierce warrior, and is admired by the entire Dhampir and Moroi world. When we first meet Dimitri in Vampire Academy he already has six Molnija marks which are given every time a Dhampir Guardian kills the evil Strigoi. He is a lethal machine who only softens ups around those he loves.

“Yet, it had been Dimitri’s gentleness and thoughtfulness mixed with that deadliness that made him so wonderful. The same hands that wielded stakes with such precision would carefully brush the hair out of my face. The eyes that could astutely spot any danger in the area would regard me wonderingly and worshipfully, like I was the most beautiful and amazing woman in the world.”
Rose Hathaway-Blood Promise.

As advocate, I am here to campaign for Dimitri and convince you of why you should vote for my favorite Dhampir. If the above has yet to convince you, then let me leave you with one final quote for you to ponder over.

The Darkling from The Grisha Series by Leigh Bardugo 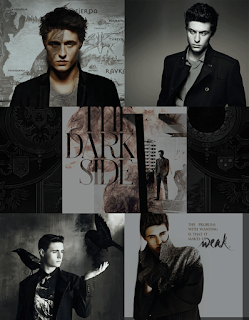 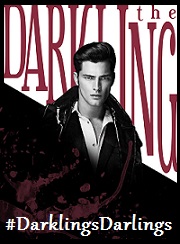 Email ThisBlogThis!Share to TwitterShare to FacebookShare to Pinterest
Labels: 3rd Annual YA Crush Tourney, dimitri vs darkling, ya crush tourney #3, YA Sisterhood
Newer Post Older Post Home
Three sisters (and some honorary ones) share a love of YA literature, review new books, and talk old favorites.