The Winner of Match #21 is Daemon!

Hey there tourney voters! I'm Stacey from the Fantasy Book Addict. If you know me from twitter, then you already know I'm obsessed with most of these YA crushes. I have a VERY LONG list of fictional boyfriends and Daemon Black is right at the top which is why it makes total sense I should represent him! Now, let's get to the awesome that is Daemon. Not only am I going to tell you why you should vote for Daemon, I'm going to tell you why he should WIN the whole damn thing! Fact #1: Daemon Black is over-the-top SMEXY! My girl Katy describes him best in four sentences: "Beautiful face. Beautiful body. Horrible attitude. It was the holy trinity of hot boys." (Obsidian) Do you still need more? How about this description from Obsidian:

"Heavy footsteps came from the other side, and then the door was swinging open and I was staring at a very broad, tan, well-muscled chest. A naked chest. My gaze dropped and my breath sort of...stalled. Jeans hung low on his hips, revealing a thin line of dark hair that formed below his navel and disappeared under the band of the jeans." Or this: "My gaze finally traveling north again, I noted thick, sooty lashes fanning the tips of his high cheeks and hiding the color of his eyes as he looked down at me." Don't forget his: ".full, kissable lips." And this: "[eyes] so green and brilliant they couldn't be real." *wipes sweaty brow* Yeah, I'm pretty sure I made my point. Daemon is all types of yum.

Fact #2: His cocky persona only makes us love him more! Who doesn't like confidence? Well, Daemon oozes it. He knows he's hot, and worse, he knows Katy does too. But, he's always really playful about it which only makes us love him more. "You're such an ass. Has.anyone ever told you that?" He flashed a genuinely amused smile. "Oh, Kitten, every single day of my blessed life." (Obsidian) "You probably even dream about me." His gaze lowered to my mouth. I felt my lips part. "I bet you even write my name in your notebooks, over and over again, with a little heart drawn around it." (Obsidian) "He rolled his eyes. "You just like me for my body. Admit it." "Well, yeah..." His lashes lifted and his eyes glittered like jewels. "I feel like man-candy" (Opal)

Fact #3: He will do anything to protect his family and Katy! Daemon was totally rude when he first met Katy. Actually, he spends a good portion of Obsidian being a jerk to pretty much everyone. But, we find out later that he was trying to protect her. He knows he can put Katy in danger and he puts aside his own feelings to try to keep her safe. That, to me, is the definition of swoon-worthy. "This was wrong. Think of Dawson. Look at what happened to him. Did I want to take the same risk? Leave Dee all alone? But even now I could feel her skin, taste it--sweet and sugary like candy. Hear that wonderful sound she made over and over again, haunting every mile I put between us." (Obsidian - The Morning After) In Daemon's mind, it's his job to protect his family. Nothing else matters to him. Throughout the series, he sacrifices himself, and when things go wrong, he blames himself. The ultimate hero.

Fact #4: He's more vulnerable than he lets on! More than anything, I think Daemon just wants to live a normal life. It seems like Katy is the one person who can see who he really is. "A smile pulled at his lips as he looked away. "I had more fun that day than I can remember. I know it sounds stupid, but--'' "It's not stupid." My heart lurched. At once, I sort of understood him better. Underneath it all, I think he wanted to be normal." "And there was the real Daemon. Still a total badass, but there was pain in him, a vulnerability in the lines of his face that I doubted anyone ever got to see." (Obsidian)

Fact #5: He knows how to deliver a memorable kiss! I have two words for you people: Laptop Scene "There wasn't a moment of hesitation. His mouth was on mine, and I stopped breathing. He shuddered and there was a sound from the back of his throat, half growl, half moan. Little shivers of pleasure and panic shot through me as he deepened the kiss, parting my lips. I stopped thinking. I pushed off the wall, sealing the tiny space between us, pressing against him, digging my fingers into his hair. It was soft, silky―" If you want to read more, you'll have to read Obsidian. There's only so much hotness I can fit into one post. ;-p Okay, okay.I feel like I've made my point. Daemon Black is the ultimate YA Crush! He deserves your VOTE!


Noah S. from The Unbecoming of Mara Dyer by Michelle Hodkin
Hi everyone! I'm Sara from The Page Sage and I'm representing Noah Shaw from the amazing Mara Dyer series by Michelle Hodkin. There are no words to express how excited I am to be advocating a character from one of my favorite series. I can't wait to tell you all about Noah... So let's get started, shall we?

Let’s talk looks.
Noah is gorgeous. He has messy, just-got-out-of-bed hair with a sexy five o’clock shadow. His clothes are constantly in disarray, in a way his tall, lean form can most definitely pull off. As for his smile, it’s one of those half-smirks, as if he’s hiding a secret. His eyes? A smoldering gray-blue. 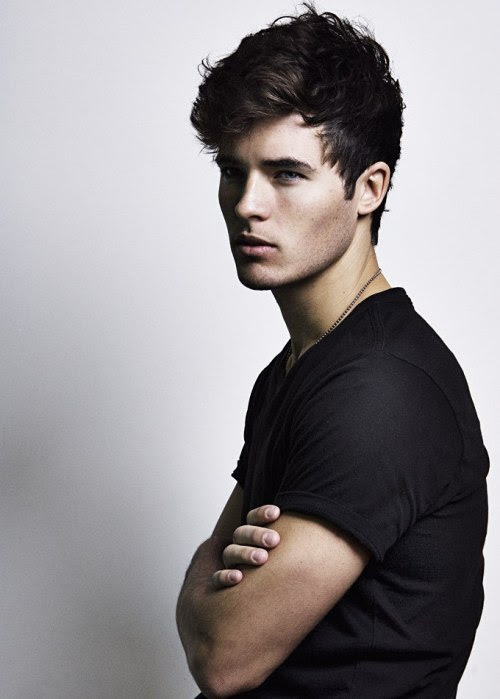 But what about brains?
I mean, looks are nice, but intelligence is truly attractive. And Noah is smart. I’m not just basing that on his witty repartee- he’s also widely read. (I mean, come on: a BOOKISH hot guy. Excuse me while I swoon.)

British Accent.
He has one. Need I say more? 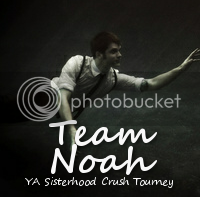 What else do you need to know about Noah Shaw?
1.) He saved a dying dog.

4.) He’s the King of Sexual Innuendos.
“’Why do you always look like you just rolled out of bed?’
‘Because usually I have.’ And the way he raised his eyebrow at me made my blush.”

5.) He’s also terribly romantic.
“‘Mara, I have never felt about anyone the way I feel about you. And when you're ready for me to show you,’ he said, brushing my hair to the side, ‘I'm going to kiss you.’ His thumb grazed my ear and his hand curved around my neck. He leaned me backward and my eyes fluttered closed. I breathed in the scent of him as he leaned in and kissed the hollow under my ear. My pulse raced under his lips.
‘And I won't settle for anything less.’”

What more can you want in a Crush, right? He's drop-dead sexy with razor sharp intelligence, with a British accent and devious smile. BUT, in case I haven't convinced you yet, I wrote a song based on his relationship with Mara. (Which, admittedly, may not convince you at all, but I get points for effort, right?)


Mara was told she'd "love him to ruins." Now it's our turn to love Noah to victory!