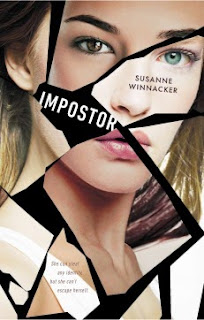 
I LOVED this one!!!  I really wish there were more thrillers like this one in the YA genre.  From Chapter 1, I was completely hooked, and no matter how fast I turned the pages, it wasn’t fast enough.  I couldn’t wait to discover the villain and watch as Tessa finally discovered the strength in herself.


I really enjoyed the idea of “Variants,” people with extraordinary abilities living among us.  This book has a flare of X-Men to it with the suspense and mystery of any great thriller (you name it—Bourne, Bond, etc.).  Seeing all the different abilities was intriguing, but more importantly, I really enjoyed seeing how having these abilities transformed and altered their views on the simplest things—safety, love, truth, friendship.  There is always an air of danger to their lives and their relationships, and it really makes them more vulnerable than most—despite their powers that put them above most of mankind.


Tessa was a great main character.  She was strong and confident, but she was also realistic—making some really dumb moves at times.  Her vulnerability in her feelings for Alec also added to her realism.  Many people will think that her heartsickness over him is annoying, but I thought it made her more human in a book where normal humans were few and far between.  In truth though, I’m hoping she ends up with Devon—the brother of the girl Tessa is sent to impersonate.  He’s a bit on the mysterious side, and I love the boys with secrets!


Of course, Alec definitely has secrets of his own, and I don’t think we are finished discovering them all.  Alec is kind of like Superman (minus the flying)—he’s much stronger and much faster than most humans.  Therefore, you can imagine what swooniness could come about if Tessa were to, I don’t know, faint and have to be carried home?   Still, all the strength in the world and he can’t muster up the courage to tell Tessa how he feels, even though it is so obvious from the first page.


I really liked that Susanne kept her story succinct, but not so short that it felt unfinished.  There was action in every chapter, and I never got bored with the characters.  The pacing was great because it wasn’t drawn out just to hit a certain number of pages.  The plot carried on perfectly, without extraneous details that usually drive me nuts.  I am definitely looking forward to the sequel!