Wanna win and ARC of the amazing Incarnate by Jodi Meadows?

Trust me, you do. Check out our Waiting on Wednesday post for the book and our Teaser Tuesday.

Or just check out this summary: 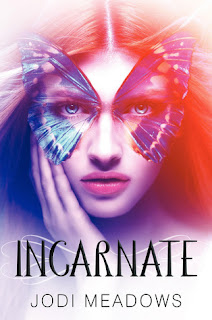 NEWSOUL
Ana is new. For thousands of years in Range, a million souls have been reincarnated over and over, keeping their memories and experiences from previous lifetimes. When Ana was born, another soul vanished, and no one knows why.
NOSOUL
Even Ana’s own mother thinks she’s a nosoul, an omen of worse things to come, and has kept her away from society. To escape her seclusion and learn whether she’ll be reincarnated, Ana travels to the city of Heart, but its citizens are suspicious and afraid of what her presence means. When dragons and sylph attack the city, is Ana to blame?
HEART
Sam believes Ana’s new soul is good and worthwhile. When he stands up for her, their relationship blooms. But can he love someone who may live only once, and will Ana’s enemies—human and creature alike—let them be together? Ana needs to uncover the mistake that gave her someone else’s life, but will her quest threaten the peace of Heart and destroy the promise of reincarnation for all?
Jodi Meadows expertly weaves soul-deep romance, fantasy, and danger into an extraordinary tale of new life.
~*~*~*~*~*~*~*~*~*~*~*~*~*~*~*~*~*~*~*~*~*
Now do you want to win it?
Well, you're in luck, because we happen to have an ARC to give away!
Rather than doing a random giveaway, we've decided to hold a contest. As some of you know, we're gearing up for the next YA Sisterhood Tournament! Thanks to your votes, we will be hosting the YA Tournament of Heroines!
We're asking you all-- YA Sisters in Spirit-- to help us kick off this tournament with an extra special contest (with Incarnate as the prize).
Here's what you have to do:
*Make a banner AND a matching icon for the YA Tournament of Heroines!
*It must have the following somewhere on the banner: YA Sisterhood, the url for YA Sisterhood, and  Tournament of Heroines. The rest is up to you! Get creative, friends! Pictures, fanart, quotes, catchphrases-- go all out!
The winning banner/icon will be featured as the official banner for the tournament, and that banner's creator will be the proud new owner of an Incarnate ARC.
You have until 5pm Central time on Wednesday, November 16th to get us your entry. After that we will choose the winning banner, and the nominations for the Tournament will go live that night at midnight.
That's right-- at 12:01 AM Thursday, November 17th, Nominations will open for the Tournament of Heroines. You will only have one week to nominate your favorite leading ladies of YA literature, so be sure to spread the word!
When your finish your banner/icon, you can email it to yasisterhood@gmail.com. Be sure to also leave a comment here stating that you entered, so we can make sure we got your entry successfully. If you don't hear back from us, most likely your email went astray, and you'll need to send it again.
Best of Luck! May the odds be ever in your favor!
-YA Sisterhood
Posted by Brittany Howard at 8:28 PM