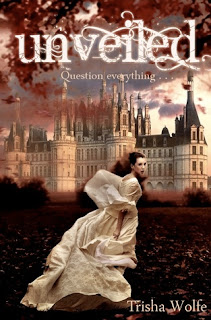 Amongst the wasteland lies the gleaming city of Karm. A Camelot-esque utopia built from the ashes of a dying world.

Seventeen-year-old Fallon is no daughter of Karm.

Raised by a secret society of rebels, she's bent on bringing down the king's sham of an existence. But her first mark, one of the king's top knights of the Force, makes her question everything. Even her heart.

~*~*~*~*~*~*~*~*~*~*~*~*~*~*~*~*~*~*~*~*~*~*~*~*
I've never quite been sure how to rate short stories or novelettes.  If anyone knows me they know I love BIG BOOKS!  The more pages a book has the better, so much so, my friend Heather bought me a bag for my birthday that says, "I like BIG BOOKS, and I cannot lie."  However, I did not have that problem with Trisha Wolfe's Unveiled!  She captured me from the 1st page and didn't let go!
It's a unique story in which it feels like a historical fiction, but its actually a dystopian.  How many times have we all daydreamed of Jane Austen's Regency Era, Shakespeare's Golden Age, or Arthur's Camelot?  Well, these people, didn't just imagine, they took it to the extreme!  As in so many tragic circumstances, there's a push to returning to one's roots, to go back to simpler times, and that is exactly what they did.  At the destruction of the world, the Force, the established government, rebuilt there society on the ideas of Camelot!  This cast that unique quality of being in the future, but it feeling like the past.
Even though the pages are few, I never once felt like I didn't know the world.  The world was well established, and the opposing forces clearly defined.  I connected with both of the main characters, and as soon as they locked eyes was cheering for the them!  And, don't worry, there is smooching, and not just once!!!
All in all, this is an amazing little novelette (with a breathtaking cover) that packs a big punch!  With 2 amazing lead characters, sword fighting, poison, dancing, intrigue, betrayal, and kissing, how can say no to that!!!  And it's not over there, Trisha is currently working on a novel with characters from Unveiled!!!  Lastly, it's only 99 cents on Amazon and Barnes and Noble, so you really have no excuse to not be reading this!

I received a galley of this from the author in exchange for an honest review.
Posted by AmyG@YA-Sisterhood at 12:01 AM