Winner of Match # 1 is Clary Fray


Welcome to the YA Sisterhood! Thank you in advance for your participation in our Tournament of Heroines! We hope you make some friends (and not too many enemies), discover some fantastic books, and have a lot of fun!
Some general rules before we begin:
There may be some spoilers in the following post. We've tried to keep it fairly general, but overall, this Tourney will not be spoiler-free. So beware.
Secondly, You are welcome to write your own comments about either character in the comments section, but we will not tolerate rudeness. The minute it crosses over from logical argument into character bashing, your comments will be deleted and your vote canceled.  POLLS WILL BE OPEN FOR 24 HOURS AND WILL CLOSE AT 12:01AM EST ON DECEMBER 2ND.

Clary Fray/Morgenstern is the heroine from Cassandra Clare's Mortal Instruments Series, which includes City of Bones, City of Ashes, City of Glass, City of Fallen Angels, and coming City of Lost Souls, and City of Heavenly Fire.

Fiercely loyal & driven to help those she loves

From City of Bones - Clary felt suddenly annoyed. "When the self-congratulatory part of the evening is over, maybe we could get back to saving my best friend from being exsanguinated to death?"
From City of Bones - "I don't want tea," said Clary, with muffled force. "I want to find my mother. And then I want to find out who took her in the first place, and I want to kill them.
Feisty & independent - she doesn't put up with anyone's um ... you know

From City of Bones - "I was ninety percent sure." "I see," Clary said.
There must have been something in her voice, because he turned to look at her. Her hand cracked across his face, a slap that rocked him back on his heels. He put a hand to his cheek, more in surprise than pain. "What the hell was that for?"
"The other ten percent," she said, and they rode the rest of the way down to the street in silence."


Funny & great to have around
From City of Bones - "Don't touch any of my weapons without my permission."
"Well, there goes my plan for selling them all on eBay," Clary muttered.
"Selling them on what?" Clary smiled blandly at him. "A mythical place of great magical power."

From City of Bones - "I figured all your classes were stuff like Slaughter 101 and Beheading for Beginners."Jace flipped a page. "Very funny, Fray."

Figures it out when everyone else gives up
From City of Glass - "No. I wanted to tell you that I was proud of you." Clary slewed around to look at her mother. "You were?" Jocelyn nodded. "Of course I was. The way you stood up in front of the Clave like that. The way you showed them what you could do. You made them look at you and see the person they loved most in the world, didn't you?" "Yeah," Clary said. "How did you know?"
"Because I heard them all calling out different names," Jocelyn said softly. "But I still saw you."

Forever drawn to the gorgeous Jace
From City of Glass - All that existed was Jace; all she felt, hoped, breathed, wanted, and saw was Jace. Nothing else mattered.
From City of Fallen Angels - Not to be outdone, Clary slid her hands under the hem of his soaked shirt, and let her fingers explore what was underneath: the tight, hot skin over his ribs, the ridges of his abdomen, the scars on his back. This was uncharted territory for her, but it seemed to be driving him crazy: he was moaning softly against her mouth, kissing her harder and harder, as if it would never be enough, not quite enough —.

Fierce & Fights for what she loves


From City of Glass - "Is this the part where you say if I hurt her, you'll kill me?" "No" Simon said, "If you hurt Clary she's quite capable of killing you herself. Possibly with a variety of weapons."
From City of Glass Jace - "And then I met you.  You were a mundane.  Weak.  Not a fighter.  Never trained.  And then I saw how much you loved your mother, loved Simon, and how you'd walk into hell to save them.  you did walk into a vampire hotel.  Shadowhunters with a decade of experience wouldn't have tried that.  Love didn't make your weak; it made you stronger than anyone I'd ever met."
From City of Glass Jace - "You could have had anything else in the world, and you asked for me."  She smiled up at him.  Filthy as he was, covered in blood and dirt, he was the most beautiful thing she'd ever seen.  "But I don't want anything else in the world."
Firm hold on herself

From City of Glass, right after Jace yells at her - "When you told me the first time that Valentine was your father, I didn't believe it," she said.  "Not just because I didn't want it to be true, but because you weren't anything like him.  I've never thought you were anything like him.  But you are.  You are."

Flair for making new or stronger runes
From City of Ashes - "The completed Fearless rune was a matrix of strongly swirling lines: a rune as bold and aerodynamic as an eagle.  She tore the page free and held it up so the others could see it."

From City of Glass - "She squeezed her eyelids shut and, against the darkness behind the them, began to draw with her mine in curving lines of light.  Lines that spoke to her of doorways, of being carried on whirling air, of travel and faraway places.  The lines came together in a rune as grateful as a bird in flight.  She didn't know if it was a rune that had existed before or one she had invented, but it existed now as if it always had."

What makes Clary better than Kate
So I enjoyed Die for Me by Amy Plum but Kate was not the reason why.  Vincent was my favorite character in that book.  Kate was a puzzle to me.  She's withdrawn, even sullen and not pro-active.  It's been seven months since her parents death and while I understand it's hard for her, she is still hiding away not dealing.  Clary would never do that!

Last point - Clary gets Jace's vote! Nough said.
From City of Glass - "There is no pretending," Jace said with absolute clarity. "I love you, and I will love you until I die, and if there is life after that, I'll love you then."

Intro (aka: who am I?): Hi, my name is Carli, aka Emberchyld.  I can be found at my regular blog:  Emberchyld's Journal or my Travel blog: Carli's Travels .  To keep up-to-date on all of the #TeamKate happenings, keep an eye on my @Emberchyld Twitter feed and my Livejournal site!  Also, keep checking the amazing Amy Plum's site, because she has some great Kate goodies as incentives (ahem... teaser from Until I Die? You didn't hear it from me...)


Since this is a post to advocate for Kate as a heroine... I thought I'd abdicate my advocate duties to the person who knows her best and let him tell you why you should vote for Kate! (apologies to Amy, from whom I very LIBERALLY borrowed) 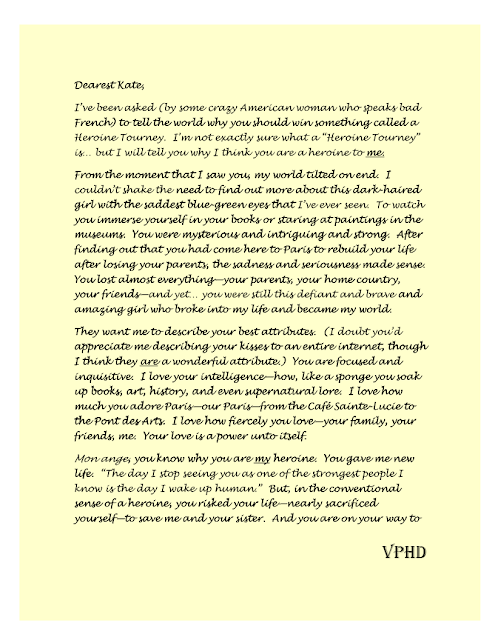 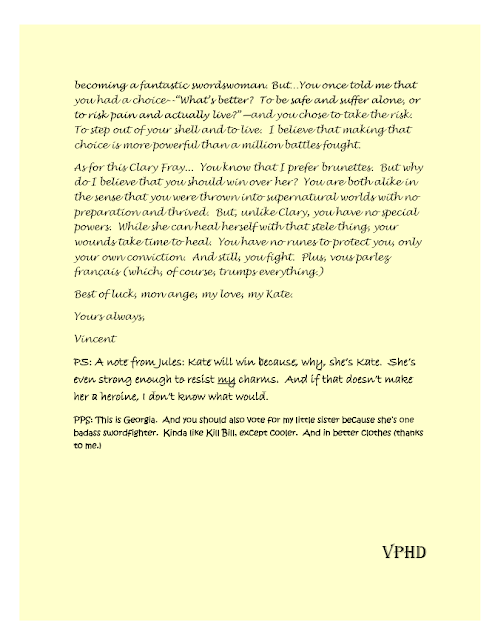 2) Thanks also to all of the commenters who helped! Moirae, Holly, InTheSpirit... you ROCK!

3) Vincent was not harmed in the
writing of this letter

4) Thanks to the YA Sisterhood for such
and awesome tourney

Email ThisBlogThis!Share to TwitterShare to FacebookShare to Pinterest
Labels: amy plum, Cassandra Clare, city of bones, clary vs Kate, die for me, the mortal instruments, Tournament of Heroines, Until I Die, YA Sisterhood
Newer Post Older Post Home
Three sisters (and some honorary ones) share a love of YA literature, review new books, and talk old favorites.