Waiting on Wednesday is a weekly meme hosted by Jill over at Breaking the Spine.  It spotlights books that have not yet been released, but ones that you should pre-order today!  This weeks book that we are anxiously awaiting is: Incarnate. It's written by Jodi Meadows, and its release date is January 31st 2012! 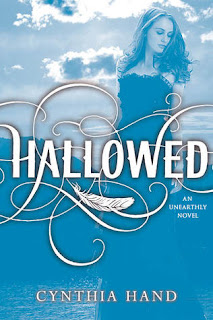 I loved the first book in this series-- Unearthly by Cynthia Hand (see my review here). And after reading Hallowed this weekend, I can definitely say that my feelings about Hand's work haven't changed. I DEVOURED this book. Like... seriously inhaled it. If you liked Unearthly, Hallowed just might be even better! I have to wait until we're a bit closer to the release date to post the review, but be on the lookout for a Teaser Tuesday of it soon!
SUMMARY:
SPOILER ALERT IF YOU HAVEN'T READ UNEARTHLY!!!!
SPOILERS AHOY!
WHY ARE YOU STILL READING? I SAID SPOILERS! :)
For months part-angel Clara Gardner trained to face the raging forest fire from her visions and rescue the alluring and mysterious Christian Prescott from the blaze. But nothing could prepare her for the fateful decisions she would be forced to make that day, or the startling revelation that her purpose—the task she was put on earth to accomplish—is not as straightforward as she thought. Now, torn between her increasingly complicated feelings for Christian and her love for her boyfriend, Tucker, Clara struggles to make sense of what she was supposed to do the day of the fire. And, as she is drawn further into the world of part angels and the growing conflict between White Wings and Black Wings, Clara learns of the terrifying new reality that she must face: Someone close to her will die in a matter of months. With her future uncertain, the only thing Clara knows for sure is that the fire was just the beginning.
BE ON THE LOOKOUT FOR HALLOWED BY CYNTHIA HAND IN BOOKSTORES STARTING JANUARY 17TH, 2012
Posted by Brittany Howard at 12:01 AM