Legend by Marie Lu
Published by:  Putnam
Release date:  November 29, 2011
Received from:  A Tale of Many Reviews
Reviewed by:  AmyG (big sis)
Sister's Say:  Legendary, Lovely, and Lots of Lip-Locking 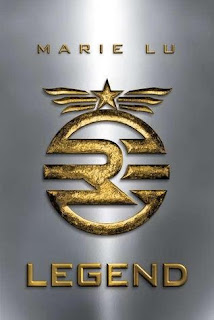 What was once the western United States is now home to the Republic, a nation perpetually at war with its neighbors. Born into an elite family in one of the Republic's wealthiest districts, fifteen-year-old June is a prodigy being groomed for success in the Republic's highest military circles. Born into the slums, fifteen-year-old Day is the country's most wanted criminal. But his motives may not be as malicious as they seem.

From very different worlds, June and Day have no reason to cross paths - until the day June's brother, Metias, is murdered and Day becomes the prime suspect. Caught in the ultimate game of cat and mouse, Day is in a race for his family's survival, while June seeks to avenge Metias's death. But in a shocking turn of events, the two uncover the truth of what has really brought them together, and the sinister lengths their country will go to keep its secrets.
~*~*~*~*~*~*~*~*~*~*~*~*~*~*~*~*~*~*~*~*~*~*
Wow!!!  Every dystopian I have picked lately from Divergent to Shatter Me has blown me away, and Legend is no different.  I kept having to hide the book during the day for fear that I would just read and completely neglect my kids.  That being said, I flew through it!  It was a perfect mix of action, intrigue, romance, forbidden love and corruption.

Of course, being a dystopian, it takes place after the fall of modern day society and encompasses the exact opposite of a utopia.  Legend picks up far in the future, and the terms they chose to represent themselves is very reminiscent of the founding days of the United States.  The ruling powers are known as the Republic, where as the rebellious, nonconformists are called the Patriots of the Colonies.  At the age of 10 the government has implemented a "trial" that all children are required to take, grouping them forever as either privileged or not.  This then determines the course of their future and what their role will be in society from that point forward.  And, let me just say, you want to be in the privileged group!

The novel is in split narrative form between Day, a wanted, "Robin Hood" type rebel that belongs neither to the Colonies or the Republic, and June, a loyal prodigy from the Republic with a slightly rebellious nature.  I have a love/hate relationship with split-narratives.  Many times I find that one character catches my attention over the other, and I tend to skim or completely skip the other characters narrative.  If the voices aren't distinct, its easy to get confused.  This was definitely not the case with Legend!  I have never liked a split narrative as much as this one!!!  I loved the fact that the narratives fit together perfectly like a puzzle piece.  Day's chapter would end with seeing June walk through a door, and June's chapter would begin with seeing Day as she walked in the door.  They were perfectly synchronized.  Also, most of their time was spent together, and if they were apart it was only for a few pages which made the novel fly by!  Isn't that what we are all craving?!?  I can't tell you have many times (and you know you do it to) where I flip ahead in the book, to see when they are going to be together again!  Well, friends, no need for flipping in this one!

Even though the novel starts out with a great tragedy that causes the Republic to pit Day and June against each other, after the two actually meet secrets are revealed, eyes meet, connections are made, and boom, everything changes!!!  Legend is a high-paced, action-packed story that will cause your blood-pressure to rise and the butterflies in your tummy to flutter!  I foresee this one being another big one in the dystopian market!  Go ahead, pre-order it and add it to your TBR because people are going to be talking about it!!!

Posted by AmyG@YA-Sisterhood at 6:00 AM