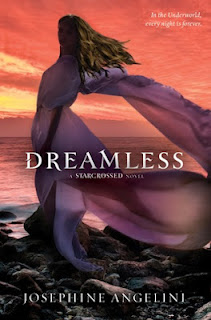 
ARC Received from Harper Teen through Edelweiss
Release Date:  5-29-2012
Reviewed by:  Middle Sis Jenn
The Sisters Say:  Dazzling, Daring, and Dangerous
Can true love be forgotten?
As the only scion who can descend into the Underworld, Helen Hamilton has been given a nearly impossible task. By night she wanders through Hades, trying to stop the endless cycle of revenge that has cursed her family. By day she struggles to overcome the fatigue that is rapidly eroding her sanity. Without Lucas by her side, Helen is not sure she has the strength to go on.
Just as Helen is pushed to her breaking point, a mysterious new Scion comes to her rescue. Funny and brave, Orion shields her from the dangers of the Underworld. But time is running out—a ruthless foe plots against them, and the Furies' cry for blood is growing louder.
As the ancient Greek world collides with the mortal one, Helen's sheltered life on Nantucket descends into chaos. But the hardest task of all will be forgetting Lucas Delos.
Josephine Angelini's compelling saga becomes ever more intricate and spellbinding as an unforgettable love triangle emerges and the eternal cycle of revenge intensifies. Eagerly awaited, this sequel to the internationally bestselling Starcrossed delivers a gritty, action-packed love story that exceeds all expectations.


Two days ago I read Starcrossed and could not put it down! It was the book equivalent to the where-have-you-been-all-my-life? guy. After finishing it, I went straight to my ARC of Dreamless (thank you HarperTeen and Edelweiss) and stayed up most of the night reading.

Some people have a way with words---and Josephine Angelini is one of those people. I just got swept away in her descriptions! I felt like I woke up one morning and found myself in her world--looking around to see Lucas, Helen, Hector, Cassandra and the whole gang. I just love when a book can transport you to another place and time--the only true magical powers anyone can have! (I think)

I absolutely adore Angelini's characters. They are so vibrant and full of life--even the characters that are not in complete focus, like Hector. I just love Hector--strong and mighty, yet completely and utterly devoted to his family. Angelini gives him so much depth even though he's not one of the main two, Lucas and Helen, and I appreciate that she spends so much time building her characters so that every dimension of her book comes to life.  She gives each of her characters such grand gestures and personality that you just can’t help but feel your way through the book with them.  And it’s not just the good guys that she creates so well…I mean, I quite literally HATE Daphne…but Josephine intended for us to dislike her.  The writing brings Daphne to life, and you truly have an emotional response.  If only I could pull a pensieve-like move and instead of jumping into memories, jump into a book!  I’d give Daphne a taste of my fist….and Lucas...hehe, a taste of my lips?  Is that inappropriate?  I’m gonna go with no.

The Greek mythology is so....there are no words. The way she depicts the Furies is cataclysmic, and it's so new and original. I can literally see them slinking across the ground in craziness begging for murder so that for one tiny second, they can feel at peace--if that is even possible. I've always pictured the Furies as these evil hellbeasts, and I admit, I much prefer Angelini's tortured Furies over the ones I have always known.  Her imagery of the Furies melts into the page, and I have never felt more lost in tragedy, hatred, and misery.  It’s amazing.

Lucas! I admit, I read books for the guys--the ones that sweep you off your feet over and over again, and Lucas, being the flyer he is, can quite literally sweep you off them! If only I could stay in the air with him and never come down! He is the perfect young adult guy, and I have to say, whenever I see my ideal ya guy in a novel, I find myself never being able to put it down. He rivals Daemon, Aiden, Four, and Jace for me! He's overprotective (which I love…throwing punches is so hot—don’t judge me), strong and chiseled (oh la la), arrogant and tempermental (sigh), and completley broken and struggling (if only I could save him)!   My heart literally aches for him, and I can't wait for everything to FINALLY work out!

There were so many twists and turns that I didn't see coming in Dreamless, and I really admire Josephine Angelini for her inventiveness with mythology. I will admit that I longed for more of the love story, but after Daphne's evil treachery (in my mind its evil) of convincing Lucas and Helen that they are cousins when they are not, I knew I was in for lots of angst (grrrr).  Hopefully I will get more of my love story in book 3!

So....after much rambling about how I love this book, I will say that it is a MUST READ! I went through the gamut of emotions with this one--happiness, sadness, anger, disbelief, more anger, and a little (okay a lot) of lust :) Shame on me (hehe) or shame on Angelini for writing such a wonderfully addictive novel!
Posted by Jennifer @ YA Sisterhood at 12:01 AM