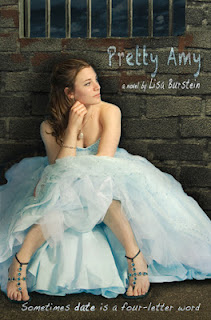 Amy is fine living in the shadows of beautiful Lila and uber-cool Cassie, because at least she’s somewhat beautiful and uber-cool by association. But when their dates stand them up for prom, and the girls take matters into their own hands—earning them a night in jail outfitted in satin, stilettos, and Spanx—Amy discovers even a prom spent in handcuffs might be better than the humiliating “rehabilitation techniques” now filling up her summer. Worse, with Lila and Cassie parentally banned, Amy feels like she has nothing—like she is nothing.

Navigating unlikely alliances with her new coworker, two very different boys, and possibly even her parents, Amy struggles to decide if it’s worth being a best friend when it makes you a public enemy. Bringing readers along on an often hilarious and heartwarming journey, Amy finds that maybe getting a life only happens once you think your life is over.


Pretty Amy is a heart-breaking tale of a teenager’s struggle to climb herself out of the downward spiral that has landed her at rock bottom.   Lisa Burstein shows us what it’s like to be lonely and then accepted and then outcast and vilified in high school.


When I first started reading this book, I had a very difficult time getting from one chapter to the next because Amy was so heart-breaking.  She’s shy and insecure and every bit of her self-worth is based upon how other people see her.  She’s an avid smoker and, following her friends, tries to rebel against the normal life that haunts her.  I had a really difficult time relating to Amy because I never got in trouble in high school (my parents were teachers so I steered clear of trouble!), and I loved high school and cheerleading and prom and all the other experiences it had to offer.  With that said, I am glad I finished the book because it did get much better near the end, and I finally had some respect as Amy began to forget about the world and concentrate on herself.


Amy wasn’t the only character that caused high emotions with me­­—there were times I literally wanted to punch her parents (especially her mom) in the face.  And then stomp away, only to return and hit them again!  Being a parent, I tried to imagine myself in their situation—a child in trouble with the police for drugs; but even thinking about that, I was still angry with how her parents responded.  I won’t say any more because I don’t want to spoil it, but let’s just say, high school isn’t the only obstacle with which poor Amy must learn to deal.


So…what did I enjoy about the book?


I love Amy’s sarcastic side—that’s the only part of her that is truly her at the beginning.  She’s smug, smart, and misunderstood; and all of those characteristics come out in her sarcasm.  For example, at one point Amy is talking about her mom, “For Chanukah last year she got me an itchy sweater and Chicken Soup for the Daughter’s Soul.  The inscription read, FYI.”  This is the part of Amy that I enjoyed, and as she grows throughout the novel, we see more and more of the true Amy.


I also really love Joe, Amy’s ex-best friend.  We catch small glimpses of him throughout the novel, and although at times he comes off as a jerk, you can truly see that he has a good heart.  He is the character that brought a smile to my face and kept me waiting for more!  I do wish there would have been more of a romance in the novel because I’m a sucker for romance, and I think it would have given a slight break from the gut-wrenching torment that Amy went through day by day.


Overall, I think many readers will relate to Amy or will recognize a friend in her.  It’s a truly honest depiction of the pains that loneliness and insecurity can create, and how, seeking attention, someone can act out in the worst ways.  While this book wasn’t one of my favorites, I do believe that it will gain a large number of fans who feel for Amy's situation and who can learn from her road to realization.  Plus, the parrot, Amy's pet, is adorable!

Content Warning:  This is for older young adult readers due to drug use and extreme language.
Posted by Jennifer @ YA Sisterhood at 7:59 AM