Welcome to the Surrender (Possession #2) Blog Tour.  Today we are thrilled to have Elana here talking about something that is near and dear to all of our hearts!  How many of you have basically gone completely fangirl over the heroes POV?  I know all of us at YA-Sisterhood have done our far share of squeeing.  The male's POV is hot, hot, hot right now in the YA genre, and Elana is here today to talk about it.  Surrender has a split POV between the heroine and hero, so Elana has had to get up close and personally with the male POV.  Here's what she has to say about it!

Okay, so there are two narrators in SURRENDER. A girl named Raine Hightower—who is the Director’s daughter. We find out in chapter one (and you can read the first two chapters of SURRENDER here) that Raine is roommates with Vi.

But chapter one isn’t narrated by Raine. It’s narrated by a boy named Gunner Jameson. Writing a male narrator was a long and winding road for me. When writing SURRENDER, or rather, as I was trying to write SURRENDER, I tried several different points of view.

I’d written several different first chapters, some of them progressing for several thousand words. Nothing worked. Nothing.

So I threw everything else out and started from blank pages. And thus, Gunner Jameson was born. Within a chapter or two, I knew that I had found the right narrator. The series needed a male narrator. Someone who was more level-headed, who mainly wanted to keep things the way they were, who wasn’t in the Resistance (like Jag Barque) and who wasn’t completely clueless either (like Violet Schoenfeld).

Having Gunn exist in the middle provided more insight to the world. And using him as a narrator allowed me to widen the lens on the society too.

Writing a male POV was a little difficult. I’m not a guy. So I tried really hard to create him and then stay true to him. I had a couple of men read the book and give me some insight into the male psyche.

The male POV in YA novels is a bit of a rare find. As I was writing SURRENDER, I read male-narrated books, and actually took notes on personality and dialog and all sorts of things.

I think readers really like reading a YA novel from a male perspective, because there aren’t as many of them. I think sometimes a male narrator can make the novel stand out from others, because it’s automatically different. They don’t feel like every other novel, simply because of the narrator.

I also think that yes, the majority of YA readers are girls. And while girls like reading about teens like them, they also enjoy reading about and connecting with boys. I know I do!

What do you think? Do you like male narrated novels? And why? 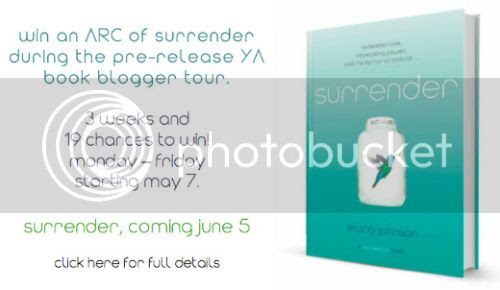 Contest Copy for the SURRENDER ARC Giveaway, Week of May 14

So this week, as part of the pre-release tour of awesome, you have the chance to win an ARC of SURRENDER before it releases on June 5. And not just one chance. SEVEN CHANCES.

That’s right! There are SEVEN (7!) ARCs available to win this week. Here’s what you can do to win one.

Please fill out the Rafflecopter entry widget with what you’ve done. This contest ends at midnight on Friday, May 18, is open in the US and Canada, and winners will be notified over the weekend. Good luck!
Click on the blog tour pick above to see schedule and tour details.
**Be sure to check back tomorrow to read our review of Surrender.**

Forbidden love, intoxicating power, and the terror of control…
Raine has always been a good girl. She lives by the rules in Freedom. After all, they are her father’s rules: He’s the Director. It’s because of him that Raine is willing to use her talent—a power so dangerous, no one else is allowed to know about it. Not even her roommate, Vi.
All of that changes when Raine falls for Gunner. Raine’s got every reason in the world to stay away from Gunn, but she just can’t. Especially when she discovers his connection to Vi’s boyfriend, Zenn. Raine has never known anyone as heavily brainwashed as Vi. Raine’s father expects her to spy on Vi and report back to him. But Raine is beginning to wonder what Vi knows that her father is so anxious to keep hidden, and what might happen if she helps Vi remember it. She’s even starting to suspect Vi’s secrets might involve Freedom’s newest prisoner, the rebel Jag Barque....

Posted by AmyG@YA-Sisterhood at 12:00 AM