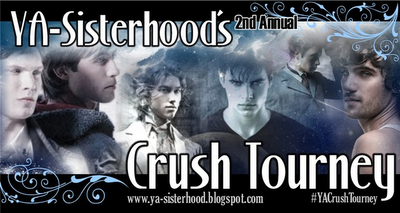 It took a little while, but we've finally recovered from the madness and chaos of our 2nd Annual YA Crush Tourney! We cannot even begin to express how much we adore you all! We unanimously think that this was our BEST TOURNAMENT SO FAR!

Do you guys agree?

Despite a somewhat rocky start, you guys made this such an awesome experience for us as moderators, the advocates, and the authors!  And we LOOOVE you for it!

We had so many fabulous memories from this tournament:

Our first time ever trending on twitter on the Tournament's opening day! That day was CRAZY!

Our first ever male advocate (shout out to Benji)!

Daemon asking us if we want a cookie! *dies just at the memory*

That insane final four with Two Vampire Academy and Two Infernal Devices boys squaring off against each other!

And, of course, that insane finale that literally came down to the very last moments.

In short, this tournament was the most fun we've had in a long time!

And to celebrate, we have two huge things to tell you!

First, many of you have been asking about the future of the tournaments. We weren't planning to do any more because of some events that transpired early this summer. However, this tournament was so beyond amazing that we've decided to reconsider. Nothing is certain yet. We're looking at the possibility of doing similar tournaments, but perhaps in a different format. All we can say for sure is that there will be more fun, book-loving things to come from YA Sisterhood!

Next, it's time to honor our advocates! Remember those literary fiends who spent hours working on original defenses, stayed up all night tweeting, and made some killer icons? Yeah, we remember them, too! We had an amazing group this year, and thanks to the generosity of numerous bloggers and publishers, we're able to award them all some small prizes as our thanks!

Thanks goes to the following people and publishers for donating Advocate Prizes:

Thank you times a million to all of you!  You were beyond generous and provided some great prizes for our advocates!


And now, here's our final list of the characters and their advocates:

Adrian Ivashkov of Vampire Academy and Bloodlines by Richelle Mead.

We don't have to tell you all how amazing Adrian is. He won the tourney, after all! But we will anyway! Adrian is drop dead gorgeous vampire with snarky comments that are almost as good as his looks! He's charming with that bad party boy appeal, but definitely has a softer side. He's artistic (and he can make us a painting anytime). If he's not making you laugh, he's making you swoon! He's not your typical hero, but that's why we love him so much! Three cheers for the reign champ of the YA CRUSH TOURNEY!

Adrian was represented by the amazing Anna from The Bursting Bookshelf!

Coming in second was the devilish and sexy Will Herondale, represented by Katie from Mundie Moms and Alyssa from TMI Source! He put up an amazing fight, and his status as a major book crush is obvious!

These other amazing Characters and Advocates made it into the Elite Eight!


And now to celebrate the Characters and Advocates of the Sweet Sixteen!


And last, but certainly not least, there's the rest of the top 32 Characters and Advocates that beat out hundreds of characters and dozens of other advocates to make the Tournament!

And one more time, thank you from the bottom of our hearts to everyone that participated, voted, advocated, and donated books.  You are all rock stars!!!  A huge, gigantic thank you to Rachel and Brooke also for your help behind the scenes!  You 2 made things SO MUCH less stressful! I love, love, love you both!!!  And lastly, thank you to the authors that created all these amazing, crush-worthy characters!  You are the reason why we are able to have this touranment!  Thank you, thank you, thank you for all you do!!!! We hope you have many, many more fans because of these tournaments!

Posted by Brittany Howard at 12:00 AM