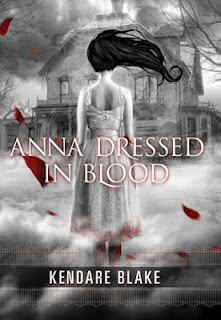 Anna Dressed in Blood by Kendare Blake
Published by Tor Teen
On Shelves Now
Reviewed by:  Middle Sis Jenn
The Sisters Say:  Sinister and Superb, A sucker-punch to awaken the world of YA!
Just your average boy-meets-girl, girl-kills-people story... (don't you just love that...hehehe)

Cas Lowood has inherited an unusual vocation: He kills the dead.

So did his father before him, until his gruesome murder by a ghost he sought to kill. Now, armed with his father’s mysterious and deadly athame, Cas travels the country with his kitchen-witch mother and their spirit-sniffing cat. Together they follow legends and local lore, trying to keep up with the murderous dead—keeping pesky things like the future and friends at bay.

When they arrive in a new town in search of a ghost the locals call Anna Dressed in Blood, Cas doesn’t expect anything outside of the ordinary: move, hunt, kill. What he finds instead is a girl entangled in curses and rage, a ghost like he’s never faced before. She still wears the dress she wore on the day of her brutal murder in 1958: once white, but now stained red and dripping blood. Since her death, Anna has killed any and every person who has dared to step into the deserted Victorian she used to call home.

And she, for whatever reason, spares his life.
One of our honorary sisters reviewed this over a year ago, but I loved it so much I wanted to share my thoughts, too!  Plus, since Girl of Nightmares just came out, many people are just now reading Anna!


So, I’ve been staring at this book for months now trying to work up the courage to read it.  And when  say months, I mean, at least six—but I always psyched myself and decided it was probably too scary for me.  So, when I finally picked this up to read, it was a big deal to me.  I mean a BIG DEAL!  Further explanation?  I don’t do horror.  Whenever I think I’m kick butt enough to watch a horror movie, I end up sleeping with EVERY light on for at least a week.  In fact, when I watched Silent Hill…that week turned into almost a month.  I don’t do scary.  So, I started reading Anna, completely sure that I would spend my nights lying flat on my back…with dozens of pillows surrounding me….with all the lights on….and with my glasses perched on my nose all night (just in case I heard and noise and needed to quickly scan the room)….and with a bat hiding snuggly under the bed (if I could brave myself enough to look under the bed).  AND?  Pleasant surprise!  Anna was amazing—scary at times, but not so much to warrant an all-night watch-for-the-unworldly-athon.


The best thing about this book—it was the FIRST BOOK EVER where I liked the female main character better than the guy.  This is a big deal!  Big!  I’m usually swept away by the good boy with charming good looks and sweet smile, or fall head over heels for the bad boy whose arrogance rivals only a Greek god’s.  But, with this one, I immediately fell on the side of Team Anna.  She was so awesome!  The way Kendare described her was chilling, and her words wrenched me from the recliner and thrust me straight into that old Victorian where I felt like I was staring the “dark goddess” in the eyes.  Full of power and darkness, yet ridden with innocence and guilt; Anna was the kind of bad guy that you just can’t help root for.


Now that doesn’t mean I didn’t like Cas, I really enjoyed him, also.  Tough and arrogant, and completely at home in the other world, Cas will definitely leave you breathless at moments.  Cas has been left with the duty of sending murderous ghosts back where they belong, but there is a part of him that wonders about his destiny.  He struggles with everything he doesn’t know about the world on the other side.  I loved watching his journey of truth, and by the end of the book, though his journey is far from over, I felt like Cas had grown from a boy exacting revenge to a man seeking discover the truth about his powers.


Kendare did an amazing job creating the personalities of the minor characters, also.  You have 2 sidekicks in this Scooby gang—the quiet, nerdy boy with witchy powers (like Velma, only a dude), and the beautiful, always gets her way popular chick (we’ll call her the modern day Daphne).  Together with Cas and Anna, these two will provide the much needed comic relief from the terror of the book.


And what about the story itself?


It was full of twists and turns that (although some you could see coming), kept me on the edge of my seat.  The imagery was at times beautiful and poetic, while at other times, sinister and macabre.  There were definite gory parts, but surprisingly, they didn’t bother me.  In fact, they added to the sorrow of the story.  I mean, this is a horror story, but most of the time I either felt an unwavering sadness at how evil had caught so many in its net, and at other times, I was in awe—of the way Kendare put so much power into play.  Her world will melt from the page and come alive around you, and there will be times when you will wish it could stay that way!


Okay…so I will leave you with a few statements that you need to remember!


5.) My review of Girl of Nightmares (Book 2) will be up soon.  Although I didn’t like it as much as this one, it was still great.