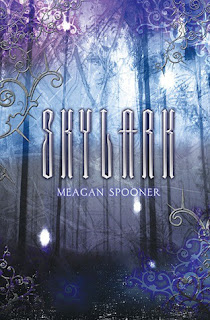 
Influenced by magic, inundated with death, and riddled with betrayal; Meagan Spooner creates a world that straddles the lines of good and evil.  Under every rock lurks a secret, behind every cloud hides the truth, and around every corner awaits destruction—watch where you tread, or you just might get lost in her world.  But then again, that might not be such a bad thing.


Before I started this book, I glanced through the reviews and noticed that most of them were mixed.  So, I was hesitant to start reading, however, once I did, I couldn’t put this book down.  I loved the mystery surrounding this world, and with every page, I found myself falling deeper and deeper into the darkness, forgetting to ever look up for the light.


Before I jump into what I enjoyed about this book, I want to address what many people are having are complaining about—the history of the dystopian society.  Just like many other dystopian novels, people are questioning how the world got that way to begin with or, with Skylark, where did the magic come from.  In my opinion, none of this matters.  The story doesn’t rely heavily on the past, in fact, it looks to the future—how to fix the present.  So what does it matter how the world got that way.  There was a war; it changed things.  That’s all we need to know in my opinion.  And the magic?  The book never says that this takes place on Earth—just a world with magic.  Its magic is inherent in their world—like gravity is in ours.


My favorite part of this book was the world outside of Lark’s city.  Lark’s world was once full of magic, but since the wars, magic has been drained.  As a result, there are patches of the world where magic is concentrated.  What is so unique about it is how the world reacts to these concentrated areas of magic.  Sometimes, the magic twists its surroundings into dark and malevolent creatures, bent on blood and death.  Other times, the magic creates a fantasy world—full of life and beauty.  I loved how the magic itself twisted the world into the dark or light, humans had nothing to do with it.  It was a pleasant difference from most dystopian worlds—where magic is good, but humans bend and break it to create darkness.


Lark, the main character, is strong but not overly confident.  She is determined to get to freedom, and that desire is what drives her.  But she is not the poof! I’m a super-strong warrior who can survive everywhere type of mc.  Instead, she relies heavily on the mysterious and wild Oren, who comes to her rescue more than once.  I liked Lark, but I wasn’t wowed by her.  Still, she was realistic, and I liked watching her push aside other’s perceptions to find her own truth.


And Oren—he’s as wild as any dangerous animal.  He was the strong, silent type; and would be super sexy if he wasn’t covered in blood and mud all the time.  But still, I couldn’t help but like him.  You could see in his actions how much Lark meant to him, and he puts himself in fatal danger more than once to come to her aid.  Plus, there’s that whole Tarzan kill bad guy persona.  And let’s face it…that’s just a little hot.


I was swept away by Meagan’s world and her characters.  Every time I thought I had something figured out, I was thrown for a loop by an out there twist.  Dripping with menace, Meagan’s world will take you on a dangerous journey through the heart of the wild to discover that freedom is fleeting, truth is relative, and love is perilous.
I will leave you with my favorite quote from the book: (said by Oren to Lark)
"'Even in the dark--' and I knew he did not mean nighttime when he said dark--"I can see you.  You shine.'" ARC Location 3517-3518
Posted by Jennifer @ YA Sisterhood at 12:01 AM