Cover Reveal and Giveaway: Shadow of the Mark by Leigh Fallon

Hey everyone!  Today is a great day because today we get to reveal Leigh Fallon's cover for Shadow of the Mark, the second book in her Carrier Trilogy.  The cover is absolutely gorgeous, and we know you will love it just as much as we do!!!

Before we start talking about Leigh and her series and reveal the cover, let me thank Leigh and HarperTeen for allowing us to be a part of this cover reveal.

﻿
I started out life in South Africa. A year later
my parents moved home to Dublin, Ireland. When I was older and realized my
parents had moved me from exotic Durban, to sedate Rathfarnham, Dublin 16, I
was rightly ticked off.

Giving up lions for sheep, I grew up in the foothills of
the Dublin Mountains where I went to a convent school and had to contend with
uniforms, gabardines, and nuns. When not dodging the beady glare of
the Sisters
of Mercy, I was devouring every book I could get my hands on.

I traveled all over Europe while working in banking and
treasury, but I gave up my calculator in favor of a keyboard and haven?t
stopped writing since. My first book, Carrier of the Mark, was published by
HarperTeen in 2011. 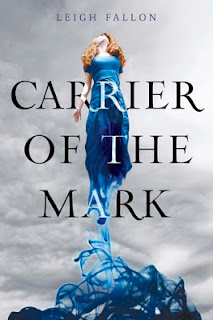 Their love was meant to be.

When Megan Rosenberg moves to Ireland, everything in her life seems to fall into place. After growing up in America, she's surprised to find herself feeling at home in her new school. She connects with a group of friends, and she is instantly drawn to darkly handsome Adam DeRÍs.

But Megan is about to discover that her feelings for Adam are tied to a fate that was sealed long ago—and that the passion and power that brought them together could be their ultimate destruction. 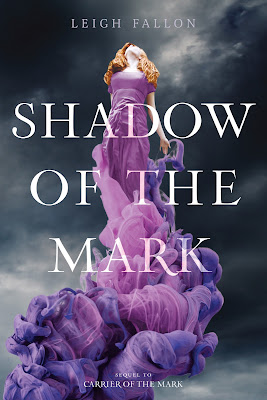 Life for Megan Rosenberg just got a lot more complicated.

While she evoked the air element, and her feelings for Adam intensified, a web of lies, deceit, and betrayal was spun around her. With the Order tightening its hold, and the reinstatement of the Mark Knights, Megan has more questions than answers as the Marked Ones grow in strength.

New people arouse suspicion, the DeRises start behaving strangely, and Megan begins to unravel a destiny shrouded in mystery. It’s a destiny the Order has struggled to hide, and a destiny someone from the past… far in the past, has already laid claim to.

Alliances will be made, and friends will be lost, as the Order’s dark secrets are revealed by the very thing they sought to destroy.

About the cover (from Leigh)

I know, there's no mistaking it. This is definitely a Carrier Series
cover, but that was the intention. After the amazing reception to the
cover of Carrier of the Mark, HarperCollins wanted Shadow's cover to
be instantly recognizable. And it is, but the new darker color palette
reflects the darker tone that this installment brings, and the pink
and purple really make it pop. I love it and think HarperCollins have
done another amazing job. I hope you like it too.

Thanks for stopping by, and don' forget to use the links below to pre-order it now!

Also, don't forget to enter the giveaway!!  There are some absolutely amazing prizes, including an ARC of Shadow of the Mark!


a Rafflecopter giveaway
Posted by Jennifer @ YA Sisterhood at 12:01 AM