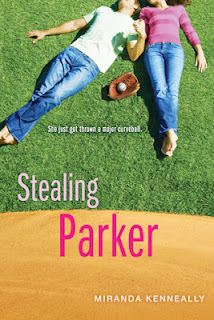 This is my first book by Miranda, and I had no idea what to expect.  Just from reading the blurb, I thought it sounded interesting, but I didn’t know how I would like the sports aspect of the story.  Don’t get me wrong---I love sports, but I’m more of a watch ‘em, not read ‘em type of girl.  Surprisingly, the sports part was one of my favorite parts of the story.  It wasn’t overly boyish and I didn’t find myself saying, “Go on…get on with it.”  Their sports world was like an entirely new setting within the high school life, and I enjoyed being opened up to a YA book that touched on sports.


The best part of the book was the growing friendship between Parker and Corndog.  It was sweet and innocent, and it just felt right.  I found myself laughing at loud at some of Corndog’s jokes, but at other times, he was a real jerk.  Just like a high school guy!  It was endearing to see him struggle with his own problems and then take them out on Parker—a realistic and heartbreaking truth about high school relationships.  I found myself waiting for Parker’s next encounter with Corndog, just to see what would happen next.


I also really liked Drew, Parker’s best friend.  He is the type of guy that you just automatically like.  He sticks by Parker when her mother comes out as a lesbian and the entire town turns on her family.   It’s a very religious town, so this caused quite a scandal.  While everyone else looked at Parker like she was the plague, Drew stood up for her and stood by her.  Such a sweetie!


I was really surprised by the mature content level of this book—it didn’t bother me at all, but I think I was expecting the fade to black type of love scenes.  At first, I enjoyed these small scenes between Parker and Brian (the coach).  It wasn’t really creepy, and I felt like they really liked each other.  However, as their physical relationship progressed, I found myself getting really annoyed by Parker and the way she discussed their relationship.  She seemed very crude to me, and by the end unfortunately, I was really wishing she would just zip her mouth.


The entire book was preachy to the extent of annoyance.  I’m from a small town, and I understand the role religion plays in the lives of people there, but I just don’t believe that an entire town would turn against someone instead of trying to save or help them.  But instead of doing that, they hurled accusatory glares and Bible verses.  It just became too much for me, and I think it took away from the book.


Most of the reviews I have read said they really enjoyed Parker as the main character, but I was on the other side of the fence with her.  She seemed very vain and immature to me, and I found her very annoying.  There were times she was so self-involved that I ended up rooting against her, hoping things would fall apart so she would look around, wake up and quit her self-loathing.


Overall, there were some very cute parts to this tale of discovery, and I think that many people will enjoy this book.  I liked that Miranda ventured into an area that many other authors might be afraid to write about, and I liked that she did it in a non-creepy way.  However, I thought that Parker and Brian (both major characters) were too wishy-washy, and this wavering made them unrealistic and frustrating to me.


Final Judgment: While this book was not my favorite, I do plan to read more of Miranda’s books in the future.


Content Warning:  I would rate this for mature teens for somewhat explicit sexual situations.  (Riding the line somewhere between YA and NA).
a Rafflecopter giveaway
Posted by Jennifer @ YA Sisterhood at 12:01 AM