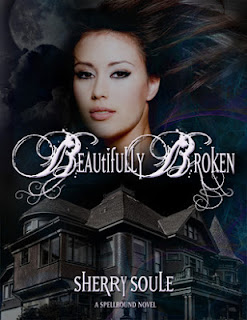 
I really enjoyed the way Sherry described her world—Ravenhurst Manor, drifting and creepy fogs, and the alluring ocean.  It felt like the fog drifted off the page and settled around me—I’m definitely leaving the lights on, just to make sure nothing creepy comes at me!


The storyline is very similar to many other YA books—a girl who discovers she’s more than just a girl and has to use her new found abilities or powers to save those she loves.  While the storyline wasn’t unique, I did find that Sherry strayed into areas that other authors are more hesitant to write themselves in to.  For example, the creepiness—most of the YA books I’ve read just gloss over the horror details, but Sherry did not.  So kudos for sticking with it!


This story follows Shiloh, who discovers she has the power to break the town’s curse.  At times, I really liked Shiloh.  She was fun and snarky and had a personality all her own; however, I got annoyed at times because of her boy-craziness.  Don’t get me wrong—I’m all swoony when it comes to the hot, mysterious guys; but I don’t need to hear a teenager’s rambling thoughts on every page.  There came a point where I wanted to slap her upside the head and tell her to get over it!  I think this might be because she is a younger heroine, but I truthfully would have liked her to be a little less in her head and more out in her world.


And then there’s Trent….resident hottie of Whispering Pines (the small town setting) who just moved in to Ravenhurst Manor.  Can’t you just hear the “da da da” of the piano here?  Trent is the kind of bad boy I like—sexy and broody with a smile to die for.  Plus, there’s the leather jacket and Mustang!  But I have the feeling that there is more to Trent than meets the eye—something sinister, but maybe in a sexy way?  Because let’s face it---even if he’s evil, he’s still smoldering!


Overall, this was an enjoyable book.  I would have liked to see more imagery throughout the book.  At times I felt like was just reading instead of participating in the action.  In order for this book to move from good to great, I needed to feel like I was immersed in the action, the romance, and the mystery; but the book never made that leap.  This is the first in the series, so hopefully, the next books will pull me into the story more.
Posted by Jennifer @ YA Sisterhood at 12:01 AM