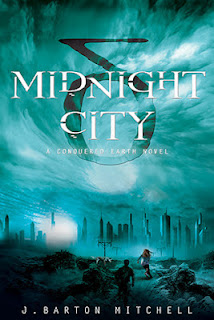 Midnight City by J. Barton Mitchell
ARC received by St. Martin’s Griffin via LibraryThing
Release Date:  10-30-2012
Reviewed by:  Middle Sis Jenn
The Sisters Say:  Mystical, Mysterious and Malevolent
In a post-apocalyptic world controlled by alien invaders, two teens and a young girl with mysterious powers embark on a dangerous journey. What they find will change everything...


Earth has been conquered. An extraterrestrial race known as The Assembly has abducted the adult population, leaving the planet’s youth to fend for themselves. In this treacherous landscape, Holt, a bounty hunter, is transporting his prisoner Mira when they discover Zoey, a young girl with powerful abilities who could be the key to stopping The Assembly. As they make their way to the cavernous metropolis of Midnight City, the trio must contend with freedom fighters, mutants, otherworldly artifacts, pirates, feuding alien armies, and perhaps most perilous of all: Holt and Mira’s growing attraction to each other.

Midnight City is the breathtaking first novel in the Conquered Earth series, and a stunning work of imagination from debut author J. Barton Mitchell.


When I first read the synopsis for Midnight City, I was intrigued; but not really sold.  I had that same outlook that I get when I see ANOTHER end-of-the-world alien movie coming out.  You know the attitude—seen one, seen them all.  I will say, with this book, I was pleasantly surprised.  Hooked from Chapter 1, Mitchell kept me guessing, page by page, mystery by mystery, and near-death experience by near-death experience.


This book wastes no time getting to the good stuff.  Straight off, I was thrown into a post-apocalyptic barren wasteland where it’s everyone for themselves.  It’s kill or be killed.  Betray or be betrayed.  This world doesn’t have the luxury of time or calm or even love.  In fact, love is the thing most likely to get you killed.  As a result, Holt and Mira are both loners, highly skeptical of anything and everything—but they must learn to put aside those instincts and embrace each other—because the future of the world rest of their shoulders, as does Zoey—the key to it all.


I really enjoyed watching Holt and Mira bicker and torture each other.  They are both such powerful people and are used to getting their own way, so when you throw these two in a ring, it’s wham-bam!  Who is out for the count, though?  You’ll have to read for yourself; and trust me, you’ll enjoy every minute of it.


My favorite part of this book was the paranormal aspects of the world—the Shadowlands.  Things that originate there have some sort of magical quality—put them together and you can be invisible, create light, or even fly on the wind.  I loved watching the new things that Mira made, and it gave a much needed mysticism to the plot.  The thing that bothered me:  the details!  It got really confusing when Mira was mixing this coin with that essence and blah blah blah.  I don’t need to know how it happens…just rub them together and show me the result.  I tended to skip over the ritual parts and go right to what happens next.


Zoey, the little girl with powers, was cute and innocent; yet you didn’t know if you could trust her.  I liked watching her cling to Holt and Mira, but then start to discover herself along the way.  I have a feeling she’s going to be clutch as the series continues.


The suspense and mysticism were amazing—and I really look forward to these aspects in the next installment.


So, what bugged me?


There were some elements that were just too much like Independence Day and Signs and War of the Worlds.  They didn’t feel original, and part of me felt cheated at the similarities.


There wasn’t enough romance woven throughout the action.  It needed a softer touch to relieve all the tension.


Overall, this was a thrill-ride of a novel.  And the ending?  Let’s just say I have a feeling Book 2 is going to be even better!!!!!  I highly recommend this to sci-fi lovers and those looking for something a little different than your regular dystopian or paranormal book.
Posted by Jennifer @ YA Sisterhood at 12:01 AM