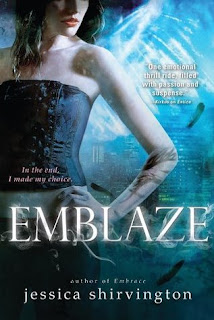 
Let me just say, I love Jessica Shirvington.  This series is turning into one of my absolute favorites, and I am giddy with excitement for the new CW show based on this series!  After that ending from book 2, “Care for a trade, lover?,”  I was on edge because I just had to know what was going to happen next.  So, as often happens, I started building up these huge expectations for Emblaze.  And I’m happy to say, that it did not disappoint!  This is the best book so far!


One of the things I love about this series is it doesn’t waste any time jumping into the action.  So many books waste time reminding us of every little detail of the past book, and that really bugs me.  I like being reminded of some things, but the bigger stuff?  No need to remind us.  Jessica doesn’t waste your time with this, instead, she jumps straight into Exile vs. Grigori action.  There is never a dull moment, and so many of the scenes are filled to the brim with powerful emotion.  I couldn’t turn the pages fast enough!


So, if you’ve read my other reviews/teasers, then you know I’m a Team Phoenix fan.  Don’t judge me—I like the bad boys that are in dire need of redemption.  (I mean, come on, I’m Team Cole, Team Darkling, so it goes without saying, I’m Team Phoenix).  And we get SO MUCH Phoenix in this one that I felt like I was on Cloud 9.  I loved seeing inside his head, knowing the pain and loneliness that consumes him from the inside out.  It made him seem more human, even when his actions were cruel and demonic.  So many people might argue that he is truly evil, but I think, more than anything, he is suffering, and as a result, he lashes out at those he loves.  It happens.  How many of us have said something we regret to a loved one?  Now, Phoenix takes this much further than words, but I think everyone will understand him a bit more after seeing that he is truly broken.


Now even though I’m Team Phoenix, I still love Lincoln, and I won’t be disappointed when/if Violet ends up with him.  That’s another think I love about this book—both guys make me happy!  I usually have a strong negative reaction towards one of the guys when there is a love triangle involved, but here?  I like them both, and will be happy no matter what ending, unless somebody dies.  Then I’ll die of misery.  But if you’re a Lincoln fan, be ready for some angst.  Some heart-pounding, soul-ripping angst.  Violet and Lincoln’s love is epic, and this book really shows us the struggle they must undergo in deciding whether love is worth the risk.


Violet remains one of my favorite heroines.  She’s strong, but not the “I just woke up one day and was a bad ass” strong.  She still has to work on her powers, and there are definitely things about her powers and her past (not to mention her future) that are up in the air.  Still, she doesn’t let that bring her down.  She stands strong and fights the exiles head on without ever wavering.  She’s not whiney, even when she has every reason to be, and I really like this no pity side of her.  If she were to sit around moping, I would definitely get annoyed.


Oh my gosh—I did not see it coming!  But don’t fret, it’s not one of those “Is he/she alive or dead” type of cliffhangers.  It’s more of a jaw dropping, “what the heck just happened?” cliffhanger.  It won’t let you upset or frustrated, only curious and thrilled for the next installment.