Once by Anna Carey 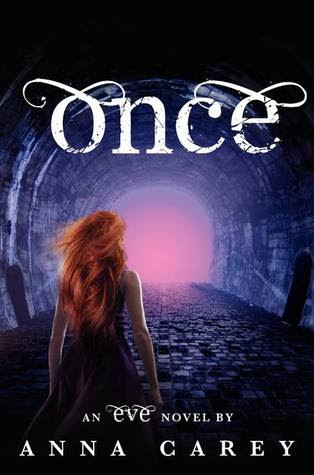 Once by Anna Carey
Won from Andrea at The Bookish Babe
Published by HarperTeen
On Shelves Now
Reviewed by:  Middle Sis Jenn
The Sisters Say:  Action-packed and romantic


I was heart-broken when this book started and Eve had been in Califia for a few months without Caleb.  I always hate the inevitable split of the two loves because (even though I know it happens in every book), I still keep thinking that maybe, one of these days, we won’t have to go through the heartbreak of watching the two main characters leave each other.  But, even though I was upset Caleb wasn’t there, I was still swept straight into the action.  Plus, it wasn’t long before word of Caleb slipped into Califia and Eve rushed out after him!


The best part about this book was seeing inside the City of Sand—it was easily recognizable as Las Vegas, but it was really cool to hear about how everything had fallen apart since the plague.  You could just picture the dilapidated buildings that the desert was trying to reclaim, and the way Anna described it was beautiful and eerie.  I think many who thought there was a lack in world building will get a little more of what they want in this installment.


I also loved that we got to meet the bad guys—The Kings and his loyal henchmen.  The worst one for me was Lieutenant Stark—grrr!  I just wanted someone to rear back and slug him right in the face…over and over again because he was such a JERK!  The greed and hatred and fear that consumed the King and his men was evident in their word and in their actions, and the tyranny and threat of violence hung heavy in the air.  Anna’s writing was so beautiful and intoxicating that I read this book in less than 3 hours!


I felt like Eve had grown up a bit in this one, realizing the sacrifices that she must be willing to make in order to fight the regime.  However, like in the first book, she made rash decisions that often made things even worse for her.  I wish she would have stepped back, taken a breath, and approached thing more rationally.  Now, I say that, but if I were in her position, I don’t know if I would have been able to think rationally either.


I really loved Caleb in this one—he was smart and strong, and I loved the way he resisted the tyranny of the King.  He didn’t just whine about his predicament, instead, he stepped up and threw himself right into the middle of the rebellion.  He was really a strong character in this one, and it made me love him even more.  Plus, his humor and soft side were much more apparent, and I felt myself falling for him all over again!  There were some great scenes between him and Eve, and I do wish there would have been more of them.  The one really important scene was very “fade to black,” too, and it took me a few pages to figure out what they did/did not do.


The only thing that bugged me is the ending---oh my gosh, I’m not a fan of cliffhangers!  Thank goodness I had a copy of Rise, or I would have had a conniption.  So, warning—if you haven’t read this one, you might want to wait the two months until Rise is released!  Otherwise, you might have a small book-related stroke.


Overall, I really enjoyed this book.  I enjoyed it more than Eve, and I really loved getting to see inside the world and characters even more.  Fans of Eve will love this one!
Posted by Jennifer @ YA Sisterhood at 12:01 AM

Email ThisBlogThis!Share to TwitterShare to FacebookShare to Pinterest
Labels: an eve novel, anna carey, dystopian YA, harperteen, once
Newer Post Older Post Home
Three sisters (and some honorary ones) share a love of YA literature, review new books, and talk old favorites.