Mini Review (by YA Sisterhood's Mom!): Wasteland by Susan Kim

Hey everyone!  Once again, YA Sisterhood's mom is helping out the blog!  She's given us a few words to share on Susan Kim's upcoming dystopian novel Wasteland. 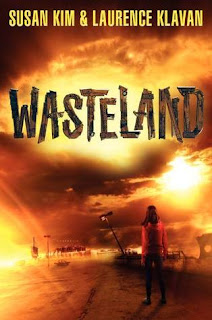 Welcome to the Wasteland. Where all the adults are long gone, and now no one lives past the age of nineteen. Susan Kim and Laurence Klavan’s post-apocalyptic debut is the first of a trilogy in which everyone is forced to live under the looming threat of rampant disease and brutal attacks by the Variants —- hermaphroditic outcasts that live on the outskirts of Prin. Esther thinks there’s more to life than toiling at harvesting, gleaning, and excavating, day after day under the relentless sun, just hoping to make it to the next day. But then Caleb, a mysterious stranger, arrives in town, and Esther begins to question who she can trust. As shady pasts unravel into the present and new romances develop, Caleb and Esther realize that they must team together to fight for their lives and for the freedom of Prin.

******************************
Thoughts:
In a Wasteland parallel to THE ROAD, Susan Kim and Laurence Klavan have created a dystopian society with one major conflict--survival.  It's a world where reading is almost extinct, where rain is a killer, and where material items such as a Lexus lie wasting in the street, but there is one major commodity--fresh water. And as in all time periods, greed seems to multiply. Into this chaos comes Esther, out casted because of her refusal to conform when it comes to rules and friends, and Caleb, searching for his kidnapped son and those who murdered his partner. The plot is as dark as the world the authors have created, yet Esther and Caleb find love (although the "I Love You's" occurred a little too quickly for reality). However, those who love apocalyptic nightmares will definitely be hooked on this one!
Posted by Jennifer @ YA Sisterhood at 12:01 AM