1.) Where did the idea for Also Known As come from?
It all started when I couldn't get into the storage unit in my apartment building. It had a Master Lock on it, but i had forgotten the combination, so I went to the source of all information: Google. 15 minutes later, I learned how to crack the lock and I started thinking how awesome it would be to do that for a living. And lo, Maggie was born.
2.) (Just for giggles) What are the 5 best benefits to being a teenage safe cracker?
1. Being able to get into your locker with no problem.
2. Being able to get into someone else's locker with no problem.*
3. Always having a good excuse to skip class. ("Sorry, I have to go save the world. Get the homework for me, okay?")
4. Your extracurricular activities will be quite impressive on your college applications.
5. No one can keep secrets from you.
*Very unethical, but still.
3.) Would you be a spy if you could?
I think, ideally, I would love to be a spy, but I would be the WORST spy in the world! I get too nervous and I blush easily, and I don't have Maggie's steady nerves when it comes to cracking safes under pressure. Our national security would be compromised in five minutes. I'll stick to writing novels.
4.) What projects are you working on right now?
The sequel to "Also Known As", which is so much fun! I love finding out what's happening with my characters and watching them grow. They're like my little fictional children, so I like checking in on them from time to time.
5.) Just for fun, what’s your favorite:
Drink: Espresso or prosecco (depends if it's morning or night)
Song: "Deep Red Bells" by Neko Case
Movie: "Singin' in the Rain"
Book:Franny & Zooey by JD Salinger
Superhero: Violet inThe Incredibles
Disney character: Gus Gus the Mouse inCinderella (love him!)
﻿ 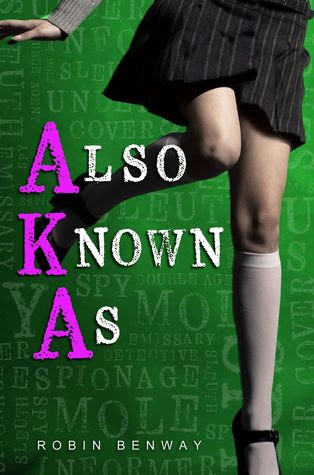 
Spies.  That’s all I needed to read before I was sold on this one.  Plus, I’m always looking for new contemporary because I love them—even though they are really hit and miss with me.  Also Known As was definitely a fun read albeit it, the story is completely unrealistic.  (At least I think it is, but who knows, I’m not a spy.)  Getting over the fact that the story seem sensationalized to me, I still found myself laughing at loud at the random humor that Robin so brilliantly added.


Robin’s writing definitely stole the show with this spy thriller.  Maggie is a teenage safecracker who has always been a part of the spy world—a girl on the outside looking in at what the normal world does every day.  And right away, she is intimidated, but that doesn’t bog her down.  Instead, she straps on her trusty sarcasm and heads straight for the lion’s den.  “Right off, I noticed that no one else was alone:  students traveled in packs of two, three, or four through the halls, not moving out of the way for anyone else…Wild animals also traveled in packs, I realized.  That was usually how they surrounded and devoured their prey.”  ARC, Location 381-383  I love her sense of humor here, and Maggie’s blunt and clever thoughts just keep getting better and better.


I loved Maggie, but my favorite character, by far, was Roux.  She’s this punk girl with a “stick it to the man” chip on her shoulder, and I loved every single, trashy word that leaped from her mouth.  She was hilarious, and she had a way of turning the simplest of scenarios into something that will cause you to fall off the couch and roll around on the floor laughing.  (Seriously).  Need an example?  “’Well, I think we can all agree bidets are weird,’ Roux announced as she strolled back into the room.’” ARC, Location 2433-2434  I mean, girls don’t talk about going to the toilet!  So, when this came popping out of her mouth (in front of the cute guy nonetheless), I found myself laughing hysterically.  Because, let’s face it, bidets are weird!


Despite the hilarious writing and great female characters, there were still times when the plot dragged.  I found myself skipping over entire paragraphs to get to the good parts.  In a spy thriller like this, I don’t need all the extra, gritty details.  I need the bang of guns, the hiding in plain sight, and the occasional passion-filled kiss!  I really didn’t get much of this, though, which is upsetting.  The whole “spy” part of the story seemed to fall into the background as the relationship part of the story took center stage.  I don’t have a problem with this really, but it would have been nice to hear a few guns J


One other thing that threw me off (it didn’t bug me, it was just different) was how middle grade the romance and action were while the language was definitely YA to Mature YA.  I mean, there were a whole lot of s-words, and a-words and what not, but very little of anything else that would show their age level.  Take away the language, and you would have a middle grade book.  I would have preferred a steamier romance to accompany the rest of the story.


Overall, this was definitely a fun read, and I am still reeling from the great humor that Robin put into her story.  I will definitely be reading more by her in the future!  If you are a fan of spy stories or fun, light-hearted contemporaries, then this is a book you definitely need to check out.  Push through the slower parts and the unrealistic story and get to know the amazing and witty characters.
Posted by Jennifer @ YA Sisterhood at 12:01 AM