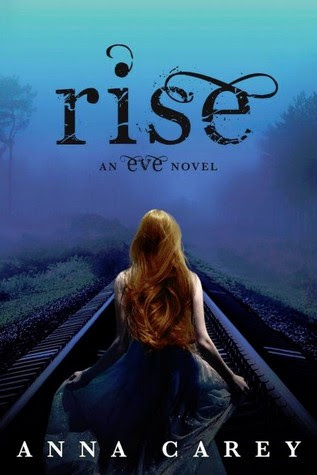 
Okay….so I’m not even sure where to start with this one.  I loved Eve and Once and read them both in one sitting (and back to back).  After that horrible cliffhanger in Once, I ran straight to my copy of Rise hoping that all would be revealed and explained.  Unfortunately, I was extremely disappointed in the revelations that awaited me in this book.  While there was plenty of action and the story was still interesting, it was missing the flare and passion that books 1 and 2 had, and once I was done, I was left in a bitter mood.


Prepare yourself for sadness—I’ll start there.  There is heartbreak after heartbreak, loss after loss in this one.  This is realistic, but it got to the point where I was wondering what horrible thing is going to happen next?  It’s really hard for me to review this one because I don’t want to spoil it, but it’s the spoilers that really disappointed me!


One of the things that really bugged me is that most of the characters we knew and had developed a love for were gone.  We had to get to know all new characters, and unfortunately, the love for them just wasn’t there like it was for others.  I mean, characters like Arden—show up or are mentioned maybe once or twice while we get to know an entirely new set of girls.  I just wasn’t a fan of this, and I wanted Anna to bring back the people that we had watched bleed and care for each other.


I also hated the lack of romance—I understand there is a war going on and there is little time for love, but romance is my favorite part of a book.  I like my romance with a side of dystopian, and not the other way around.  So, I was frustrated through most of the book because the passion and love were gone, replaced by hatred, fear, and hopelessness.


I will say I was impressed by how much Eve had grown up in this one.  No more (extremely) rash decisions.  She was entirely focused on survival and saving as many people as she can.  She was strong and endearing in her fortitude, and I found myself really admiring her strength.  She was placed in the hardest of circumstances, and she didn’t give up.  She pushed forward, no matter the pain, and didn’t look back.  I was definitely rooting for her the entire way through!


There is a ton of action in this book, and I never did get bored with it.  Like I said before, I was more just upset and frustrated with things I can’t name (because of the spoilers).  I think some people will like the brokenness of the characters and the revelations, but I think most people will react like myself, not feeling satisfied with this final book.


Finally, the things that threw me the most—the ending.  I was not a fan.  So many important things were left unresolved—who survived, who died, who was punished for their crimes—much of it was just left out in the air.  This would be acceptable if there were another book in the series, but there isn’t!  So, instead I’m left with an unresolved  feeling.  The story needed an epilogue, badly; and once you read the ending, you’ll understand why.  The final page just kind of hits you in the face, “Wham!” and then its over with no other explanation.  There are no words for it…I hate to say this because I loved the first two books, but this one just fell down like 20 flights of stairs, got up, and then fell down 20 more.


I read all 3 of these books in 3 days, and I was all excited to recommend the entire series to my friends—until the ending.  Hopefully things will be changed a bit in the final book so that maybe I’ll rethink recommending it.
Posted by Jennifer @ YA Sisterhood at 12:01 AM