Waiting on Wednesday is a weekly meme hosted by Jill over at Breaking the Spine. It spotlights books that have not yet been released, but ones that you should pre-order today! This week's book that we are anxiously awaiting is REPLICA by Jenna Black.  REPLICA releases on July 16, 2013 from Tor Teen. 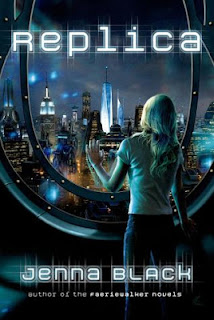 Breathtaking new YA SF from the author of the Faeriewalker series

Sixteen-year-old Nadia Lake comes from a high-class Executive family in the Corporate States. Her marriage has been arranged with the most powerful family in her state, which means she lives a life of privilege but also of public scrutiny, followed everywhere by photographers, every detail of her private life tabloid fodder. But her future is assured, as long as she can maintain her flawless public image — no easy feat when your betrothed is a notorious playboy.

Nathan Hayes is the heir of Paxco — controller of the former state of New York, and creator of human replication technology, science that every state and every country in the world would kill to have. Though Nadia and Nate aren’t in love, they’ve grown up close, and they (and the world) are happy enough with their match.

Until Nate turns up dead, and as far as everyone knows, Nadia was the last person to see him alive.

When the new Nate wakes up in the replication tanks, he knows he must have died, but with a memory that only reaches to his last memory backup, he doesn’t know what killed him. Together, Nadia and Nate must discover what really happened without revealing the secrets that those who run their world would kill to protect.

I've not read too many young adult sci-fi books, but this one just sounds completely intriguing to me.  The idea that they have clones that can take up their lives when they die is kind of creepy, but in a fascinating sort of way.  Plus, this Nate guy sounds naughty and nice!  I'm definitely thinking I should give sci-fi a try!