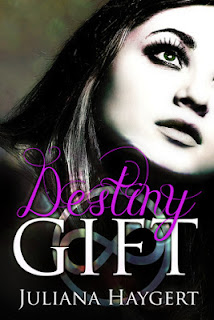 
I am loving the new NA trend in the book world, but since this is a new genre, it hasn’t really begun to fill out in sub-genres such as paranormal romance or dystopian.  So, when I was contacted by Juliana to read her paranormal NA book, I was excited to say yes.  First off, let me just say that this is NA because it follows Nadine, a college student who is struggling through visions of a hot guy, old gods, and ferocious demons.  This is NA because of the age range, not because of sex.  There is absolutely no sex in this book, so I would deem it appropriate for teenagers to read.


Overall, I liked the idea of Destiny Gift, although I struggled with the lack of imagery.  I am a huge mythology buff, so seeing old gods was fun and exciting.  Now, I have no idea if the mythology in this book comes from actual mythology or if it was made up by the author because I didn’t recognize any of the gods or the creatures.  The origins of the gods was also never mentioned in the book, so I’m thinking this is a product of imagination.  Even thus, I’m a fan of anything strange or different.


The world was terrifying, overrun with darkness (literally and metaphorical).  It had the feeling of a futuristic sci-fi movie, where you never know what is lurking around the next corner.  I really liked this part of the book, although I wish we could have seen some more world building outside of New York.  The setting was dark, eerie, and definitely made me cringe at the giant bats and demons that made sudden and deadly appearances.  Still, I wanted to feel Nadine go through these encounters, not just read about it.


There were 2 guys in this book, and both of them are elusive.  You have Victor, the man from Nadine’s visions who happens to be a real guy.  He is shut off, rude, yet there is something about him that screams broken.  Then, there is Micah, the brooding biker who is smoking hot and even more elusive than Victor.  Of course, I’m Team Micah because I love the bad guys.  Both guys have some sort of feelings for Nadine, but their intentions are unclear.  I liked both guys, but I really wanted some more steam.  We really didn’t get anything in the romance department, so that was a bummer for me.


The plot started off with a bang, but then started to slow down near the middle, and then picking up again near the end.  I think that had Juliana added more romance in the middle, I would have found this more intriguing.  Although I was able to predict most of the twists that came at the end, I still enjoyed seeing them come about.


Overall, I think this was a great idea and a great world, but it needed more flare.  I needed to feel the fear and see the darkness that entangled the world, and I just didn’t feel like I was immersed in the story as the pages went by.  But, don’t discount this book because after reading the reviews on goodreads, most everyone else loved it.  I would give this 3 stars because it was an interesting read with some hot guys, but it was missing that edge that makes me unable to put a book down.
Posted by Jennifer @ YA Sisterhood at 10:05 PM